Soi Dechanuchit in Hua Hin is almost deserted after vendors were told to stand down following four bomb blasts in the resort town. (Photo by Pattanapong Hirunard)

Businesses in Thailand are likely to be affected by the series of attacks in seven southern provinces on Thursday and Friday. Investments and tourism bookings look poised to see many knee-jerk cancellations though authorities feel the country's tourism sector should recover soon.

"We have not yet seen any kind of impact but even if there is any, there is most likely to be a recovery as in the past," Kobkarn Wattanavrangkul, Minister of Tourism and Sports, told the Bangkok Post in a telephone interview.

Ms Kobkarn said that as this was not a terrorist attack, there was unlikely to be any long-term effect on the industry. Her ministry was maintaining its target of 2.4 trillion baht of revenue from tourism for this year compared with 2.24 trillion last year. In 2015, the total number of tourists stood at 29.8 million.

As of July this year, Thailand had received 1.365 trillion out of the 2.4 trillion baht in revenue. She stressed that once the people who are responsible for the attacks are arrested, the tourism sector would rebound, adding that it would be like the Erawan shrine bombing last year when there was a sudden drop but the industry recovered soon afterwards.

However, the private sector was not as positive as Ms Kobkarn with hotels now already experiencing some cancellations in their bookings ranging from the single to double digits.

Ittirit Kinglake, president of the Tourism Council of Thailand, said that if the attacks continued and the masterminds are international terrorists, the impact on tourism will be vast because terrorist strikes are a major concern for foreign tourists.

Thirayuth Chirathivat, chief executive of Central Plaza Hotel Plc, said the series of bombings and fires in many southern provinces would have an impact on the Thai hotel industry. "Hotel cancellations will take place for sure, but it's too early to evaluate business losses and how many rooms will be cancelled," he said.

Both Centara-branded hotels, and Erawan Group Plc, which operates 40 hotels with more than 6,000 rooms nationwide, have boosted security measures to ensure the safety of tourists, informing all of their locations to enhance safety checks and to closely monitor the situation.

"We are still confident that Thailand will be able to rebound from any negative incidents or crises in a short period of time as was the case after the bombing at the Erawan shrine last year," said president Kamonwan Wipulakorn. 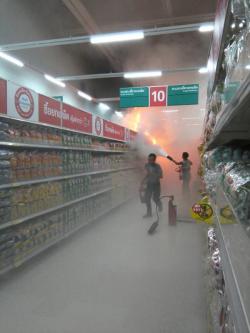 A fire at a Tesco Lotus in Nakhon Si Thammarat yesterday, which the firm said was an accident. (Photo by Nucharee Rakrun)

Suchart Hirankanokkul, adviser to the Thai Hotels Association (Southern Chapter), said the terrifying incidents in the South will affect tourism sentiment and many foreign tourists will be fearful of visiting Thailand. "This will affect the arrivals of foreign tourists as they might cancel or delay their trips to Thailand in the coming high season in October," he said.

The association will closely monitor hotel cancellations after the bombing and fire incident and Chinese tourists will likely be among the first to cancel their trips and room bookings in Phuket, which also suffered bombings, he said.

The airline industry also expects to see fallout from the attacks. Louis Moser, chairman of the Airline Operators Committee (AOC), an industry body which represents 86 international airlines and 26 aviation service providers operating in Thailand, said that there will definitely be some effect, especially as the attacks took place in well-known tourist spots.

However, he added that any impacts that arise are likely to be short term in nature and the magnitude of any repercussions should not be as great as with the Erawan shrine bombing from about the same time last year, which sent huge shockwaves through the tourism and travel industry.

The impact on the industrial sector will be limited, said the Federation of Thai Industries (FTI). Chen Namchaisiri, chairman of the FTI, said the business sector remains confident in the government's ability to be able to control law and order.

But on the investment side, economists and investors were cautious, saying the impact on the markets would be seen on Monday.

"I think the impact on the market [Stock Exchange of Thailand] will be limited to the short term and, in a way, this incident gives the market a reason to break the uptick that we were witnessing," said Kongkiat Opaswongkarn, the chief executive officer of Asia Plus Securities Plc.

Mr Kongkiat said that he did not expect the market to go down for long as there were many investors who missed the boat when the market rose and this provided a buying opportunity. But Christian De Guzman, a senior credit analyst at Moody's Investors Service in Singapore, held a different view.

"Today's events prove our point that just the referendum passing doesn't mean the undercurrents in the country have disappeared," Mr Guzman said in a phone interview with the Bangkok Post from Singapore.

"I think that investments will remain weak unless these issues are resolved, and the fact that so many bombs went off in so many tourist spots could mean that the only pillar of strength of the Thai economy could be weakened," he said, adding though that the country's credit ratings were not being looked into at the moment.