Two teenager boys from Nakhon Ratchasima are questioned by police after being arrested on charges of murdering a 28-year-old transgender woman in a Pattaya hotel room and hiding the body under the mattress.(Photo by Chaiyot Pupattanapong)

CHON BURI — Two teenage boys, one 17 and the other 14, were arrested on Sunday on charges of murdering a transgender woman in a Pattaya hotel and stuffing the body inside a bed frame.

Police apprehended the teens, both from Nakhon Ratchasima, at a bus terminal in Muang Chon Buri district around noon and took them for questioning at Muang Pattaya police station.

The body of Amphon Kongsong was found in a room of a five-storey hotel on Soi Buakhao in tambon Nong Phrue of Bang Lamung district on Saturday morning. The hotel alerted police after a maid noticed blood oozing out from underneath the bed accompanied by a foul stench.

Police officers lifted up the mattress and found Amphon’s body underneath. Two guests had left the room earlier that morning but apparently were unaware that there was a dead body under their bed. 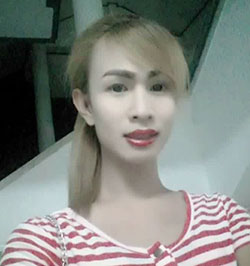 He alleged the 17-year-old admitted to killing Amphon with the help of the 14-year-old after she asked to have sex with him.

The older teen got to know Amphon through recent Facebook conversations. After their friendship grew, Amphon, who worked at a beer bar in Pattaya, persuaded him to find a job in Pattaya. The teenager, who was looking for work, asked his younger friend to accompany him.

Amphon checked into the hotel room on behalf of the teens on Aug 16. She then spent the first few nights with them and bought them food.

The older boy claimed he thought Amphon sincerely wanted to help without wanting anything from him. That was until she asked if she could have sex with him on Thursday night.

The 17-year-old rejected Amphon's advances. He said the rejection angered the transgender woman and they had an argument that escalated into a physical fight. He then strangled her with his hands in a fit of rage while the 14-year-old held Amphon’s legs. The two hid the body under the mattress and fled the hotel.

On Friday evening, a couple checked into the room and asked the hotel staff to get rid of a bad odour before spending the night there.

Pol Col Apichai said police tracked the suspects from the hotel’s CCTV footage and Amphon’s personal details during the check-in process. He said they were still in the Chon Buri area because they had no idea where they could go to hide.

The teens had a record of assault-related cases which were still before the court. Police have initially charged them with premeditated murder and body concealment. Robbery or theft would be considered if there is evidence, he added.