People leave buildings in the Asoke area after shakes from the Myanmar earthquake. (@Suriya476 @JS100 photo)

People in several buildings in Bangkok reported being shaken by the 6.8 magnitude earthquake that struck central Myanmar early in the evening on Wednesday.

"My office is shaking," an office worker on the 22nd floor of Silom Complex said at 5.42pm. "All my work colleagues stood up."

The jolts were felt in high rises in other parts of the capital including Ratchadaphisek, Khlong Tan and Khlong Toey areas. People in buildings in Chiang Mai were also shaken.

The Meteorological Department's Seismology Office said the 6.8-magnitude quake was detected at 5.34 Thai time and its epicentre was about 416 km northwest of Muang district of Mae Hong Son.

Local media said the jolt could be felt by officials working on the fourth floor of the Mae Hong Son provincial hall.

Officials at the Electricity Generating Authority of Thailand and the Royal Irrigation Department said the tremor caused no damage to any dam in the provinces that border Myanmar, including Mae Ngat Somboon Chon dam in Mae Taeng district of Chiang Mai where a very small vibration was detected at 5.34pm.

An earthquake of 6.8 magnitude struck central Myanmar on Wednesday, the US Geological Survey (USGS) said, shaking buildings across the country and the region.

The quake struck 143 kilometres west of the city of Meiktila at a depth of 84km, the agency said.

The Thai embassy in Yangon said no Thais were hurt in the earthquake in central Myanmar. 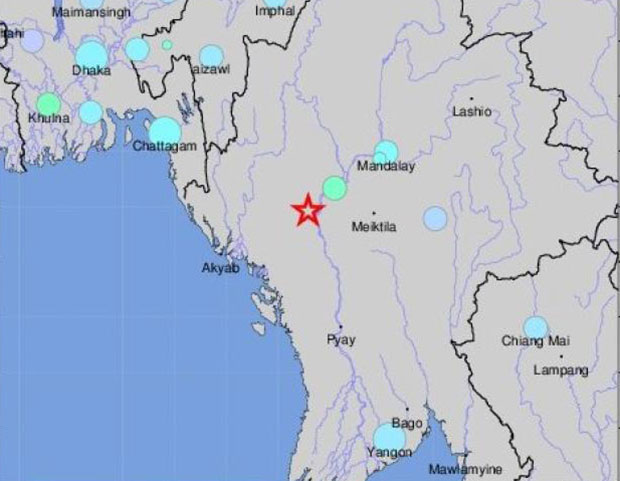 A handout shakemap released by the US Geological Survey showing the location of a 6.8 magnitude earthquake that struck at a depth of 84km in central Myanmar on Wednesday. (EPA/USGS photo)

The quake shook buildings in Myanmar's biggest city of Yangon and in other towns and cities, witnesses said.

Worried residents of Yangon, the country's main city, rushed out of tall buildings, and objects toppled from tables and from Buddhist shrines in homes. Police said the earthquake damaged several Buddhist temples in the ancient city of Bagan.