PATTANI - Police investigating Tuesday's twin blasts at a Muang Pattani hotel said CCTV footage showed the man who drove the bomb-laden ambulance fleeing on a motorcycle driven by another man shortly before the first explosion as residents and authorities picked up the pieces in the aftermath of the deadly attack.

Police said the footage showed the first suspect was driving the ambulance and parked it in a parking space in front of the hotel at about 10.30pm on Tuesday.

The second suspect, riding a getaway motorcycle, was following the ambulance at a distance of about 100 metres. He then picked up the first suspect and they fled the scene 10 minutes before the first bomb went off.

Each man wore a cap to cover his face. Police are checking CCTV footage in other areas to try to track them. They said it was still too early to tell if the incident is linked to the Mother's Day bombings and arson attacks in six southern and one adjacent central province on Aug 11-12, when four people were killed and 37 others wounded.

The first explosion occurred inside a toilet at a pub beside the nine-storey hotel about 10.40pm. Both buildings were damaged, but there were no casualties.

The second explosion followed at 11.15pm, when the bomb-laden ambulance parked in front of the hotel detonated, killing one and injuring 40 others, 16 of them still in hospital. The car bomb damaged 14 other cars and motorcycles and 20 houses and shops nearby.

Police are finding out how a pickup truck normally used as an ambulance by Paka Harang tambon health promotion hospital was used in one of the attacks. The ambulance was reportedly stolen from the hospital one hour before the attack took place.

Two hospital drivers have been detained at Ingkayuth Boriharn military camp in Pattani’s Nong Chik district under martial law for questioning. They denied any involvement in the attack.

The National Human Rights Commission and the Rights and Liberties Protection Department on Thursday condemned the use of the ambulance in the deadly attack as savage and inhumane act against innocent civilians.

Meanwhile, about 150 employees of the Southern View Hotel were brought in to remove debris left by the blasts, paving the way for major repair and renovation work which will force it to close for five months.

Ekkachai Rojanapitak, the hotel’s deputy managing director, said the car bomb heavily damaged the hotel but an initial examination indicated that its structure was intact. The extent of the damage would be known after engineers conduct a thorough inspection. The hotel will not sack any employee during its five-month shutdown for repairs, he added.

Some owners of the nearby commercial buildings damaged in the attack also began to repair their structures.

Municipal officials were seen operating garbage trucks and a backhoe to help clear the debris and remove some 14 damaged vehicles in the area. Workers from provincial electricity and telephone agencies also tried to restore power and phone systems to the community. 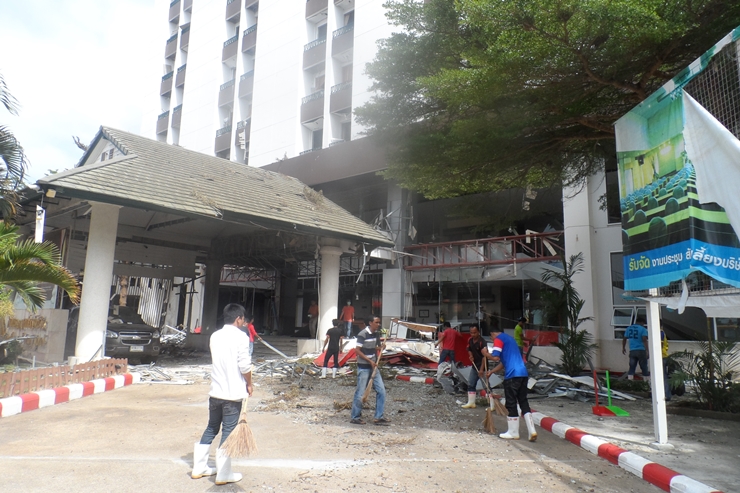