All four crewmen were injured when their Vietnam-era Huey helicopter crash-landed at a special forces base in Narathiwat province on Friday morning as it arrived to pick up two senior officers for an inspection flight.

The UH-1H  is from the  army's helicopter division in Lop Buri. It crash-landed at the Narathiwat special unit base in Muang Narathiwat district about 8.30am.

Officials said the hydraulic system broke down and the helicopter spiralled rapidly to the ground, where it exploded and caught fire.

The blaze was quickly extinguished. The four crew all escaped with minor injuries.

The helicopter was arriving from the Taksin Ratchaniwet Palace to pick up Maj-Gen Ekarat Changkaew, commander of the Narathiwat special unit, and Col Pasit Charnlekha, commander of the 46th paramilitary ranger regiment for an inspection trip in Chanae district.

Their delegation had not arrived when the crash occurred. 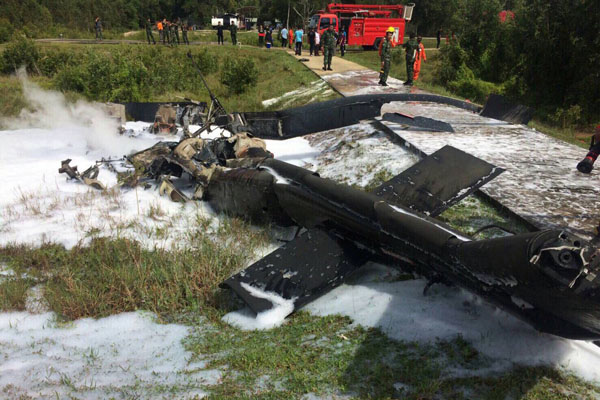 The wreck after the crash-landing (Narathiwat ad hoc unit photo)