A worker was killed and four others injured when a building under construction in Bangkok's Bang Kapi district collapsed Tuesday evening, police said.

Pol Lt Col Pongsak Kanrat, deputy chief of Lat Phrao police, said the accident occurred at about 6pm while a number of workers were working in a three-storey house being built on a one-rai plot of land in Soi Yothin Pattana 7 in Khlong Chan area. 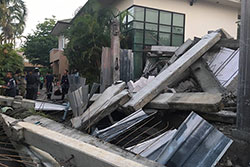 An eyewitness, Prayoon Huekkhunthod, 39, an attendant of a nearby house in the soi, told police that while a crane was about to place a concrete slab to the third floor, the building suddenly crumbled.

The workers were crushed under a pile of concrete rubble. He ran to the site and managed to pull out one of the workers to safety, Mr Prayoon said.

Rescuers from Bang Kapi district office, City Hall's Public Works Department and Por Teck Tung Foundation, who arrived shortly after the collapse, moved four workers out of the rubble. All of them were injured.

A Thai worker, Prasan Silpachai, 44, whose left leg was broken, was admitted to Navamin Hospital. Two male Myanmar migrant workers were sent to Rattana Ratchathani Hospital.  A female Myanmar worker was slightly injured in the legs.

A male Myanmar welder, who was not yet identified, was killed. He was crushed by a fallen concrete slab.

Apirom Chanthornkul, the Bang Kapi district director, said a permit had been properly issued for the construction of the house which collapsed. It was intended to be a three-storey house. The construction began about two weeks ago.

The cause of the collapse was being investigated.