The draft contract for the Sino-Thai high-speed railway should be finalised in October, and the first phase of construction is now expected to start in December, says Transport Minister Arkhom Termpittayapaisith.

"The draft contract has to be completed in October as planned, and tendering will begin in November for private sector participation in construction the first 3.5 kilometres [of the Sino-Thai railway from Bangkok to the Northeast province of Nakhon Ratchasima]," he said at the "One Belt One Road" seminar in Bangkok.

"Construction for the first 3.5km of the Sino-Thai train project will definitely begin in December," said Mr Arkhom. 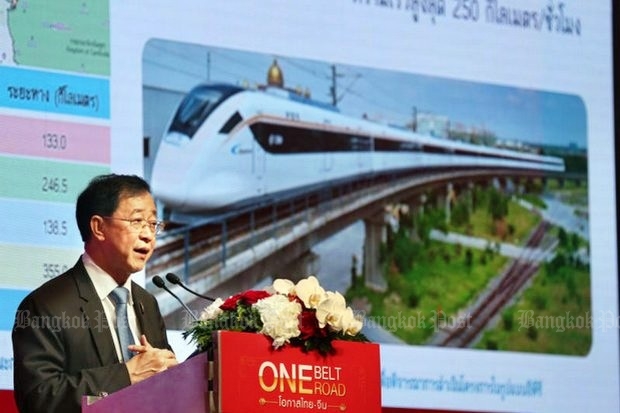 Arkhom Termpittayapaisith, Minister of Transport, detailed new, updated plans for the Sino-Thai railway at the seminar entitled 'One Belt One Road', organised Wednesday by Post Publishing. (Photo by Phrakrit Juntawong)

Construction on the Train to Nowhere was originally set to begin in June, but in mid-June, a meeting of Thai and Chinese experts promised it would start by September, after bids were called in August.

The reason for the project is political, to allow both Chinese and Thai leaders to be able to claim that "work has begun in 2016" on the 250km Bangkok-Korat high-speed project.

Mr Arkhom, who promised the September start, on Thursday updated the schedule to December, although this time he provided no details.

In June, he had said that,"We will build the short section in line with the aspiration of the leaders of the two countries.

"Klang Dong station has been selected because there is no land appropriation problem as the land belongs to the State Railway of Thailand.

"The selected area is flat and thus the construction can easily begin," he added.

As of Wednesday, however, in his speech at the seminar, that had changed to, "Construction for the first 3.5km of the Sino-Thai train project will definitely begin in December".

He offered no information or explanation for the delay.

The working committee responsible for the Sino-Thai high-speed railway project had their 14th meeting on Wednesday.

Mr Arkhom revealed that they discussed the details of the bilateral contract, the documents to be used for the tender process, and the adjustments joint collaboration of the plan will require.

It was earlier reported that construction of the initial phase of the Sino-Thai railway from Bangkok to Pak Chong would not begin in September as planned because of financial disagreements between the two countries.

The Sino-Thai railway project includes a 355km section from Nakhon Ratchasima to Nong Khai province, bordering Laos, and a 246.5km section from Saraburi province to Rayong province – the latter is set to be built at later dates.

Mr Arkhom said the working committee has set out a framework for the terms of reference to assign oversight of project construction to the Thai private sector, but specific information on this issue awaits Chinese authorities' decryption of building materials and construction design.

The committee has informed Chinese authorities to conclude these details by Oct 15 in order to seek cabinet approval within October, he said.

Thai authorities have estimated that the project's initial cost is valued at 179 billion baht and Thailand will be fully responsible for the 3.5km railway construction, for which the Finance Ministry will seek funding sources, said Mr Arkhom. 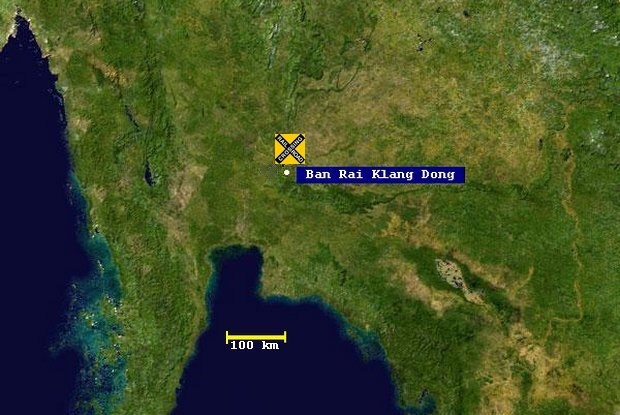 In his keynote speech delivered at the seminar, Mr Arkhom said the Thai government and the Transport Ministry will work towards accelerating infrastructure investment policy over the next eight years with mega-investment projects worth 2 trillion baht.

The Sino-Thai high-speed railway is expected to link with the Sino-Lao high-speed train project in the future, said Mr Arkhom.

The Thai prime minister and his Malaysian counterpart have also discussed building a high-speed train from Kuala Lumpur to Bangkok, he said.

A majority of people are still worried about the spread of Covid-19, although there have been no new infections in the country for over 30 consecutive days, according to an opinion survey by the Suan Dusit Rajabhat University, or Suan Dusit Poll.

A majority of people think it is now time for a cabinet reshuffle, with some say the reshuffle should involve the entire cabinet while others say only some ministers should be replaced, according to an opinion survey by the National Institute of Development Administration, or Nida Poll.

TORONTO: While some museums have had to cancel or postpone long-planned exhibits because of the coronavirus, organizers of a Van Gogh show in Toronto had a novel idea: offering art lovers a drive-in option.