Police question some of the suspects arrested during a raid on an alleged fake passport operation in Phra Khanong district of Bangkok on Friday afternoon. (Tourist police photo)

A raid on an alleged fake-passport operation in Bangkok on Friday resulted in five arrests and an additional surprise when officers discovered the dismembered body of a man in a freezer.

Officers arrested a Briton, two Americans and two Myanmar nationals during an operation in which shots were fired and a policeman was wounded.

As the search began, a suspect told police that the fake passports were in a safe. As the suspect opened the safe he reached inside for a 9mm pistol and fired three shots at Pol Sgt Maj Kanjanapong Chedej, a plainclothes tourist policeman.

He sustained wounds to the torso and was treated at Police General Hospital, said Pol Maj Gen Somprasong Yenthuam, commander of the Metropolitan Police Division 5.

After the gunman and the other suspects were arrested, the search resumed and officers found six pistols, methamphetamine, marijuana, passports, a printer and chemicals. They also found passports featuring the suspects' pictures with different names.

A further search revealed a locked two-metre-high freezer on the ground floor of the shophouse. When officers opened it they found a male body wrapped in black plastic sheets. The body had been cut into six pieces.

Officers are still in the process of confirming the identities of the suspects, he added. 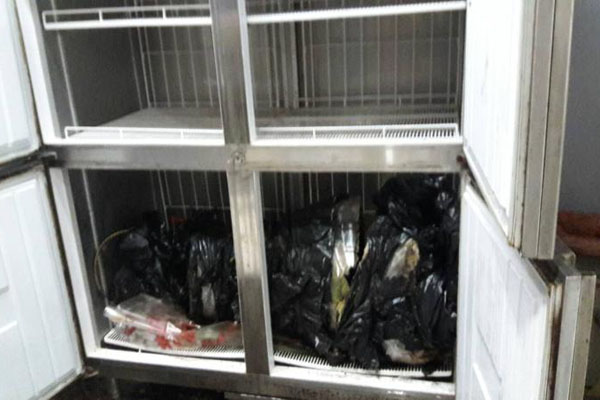 A dismembered male body wrapped in plastic was found in a freezer at the site of the fake-passport raid. (Tourist police photo) 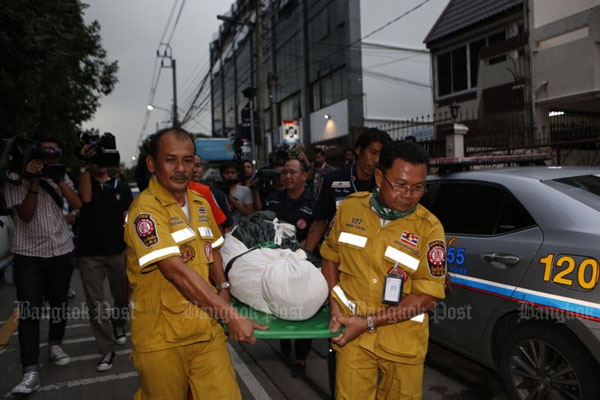 Rescue workers carry the frozen body of a man found in a freezer from the crime scene. (Photo by Pattarapong Chatpattarasill)