The BMTA displays one of the 489 new natural gas-fuelled buses that will be on the roads of Bangkok before the New Year. (Photo by Tawatchai Kemgumnerd)

The state-run Bangkok Mass Transit Authority (BMTA) will add 489 new natural gas-fuelled buses to its fleet by the end of the year.

The BMTA signed a contract to purchase the NGV buses from Bestling Group on Friday, with full delivery planned within 90 days, giving Bangkok residents a much improved service for the New Year, Deputy Transport Minister Omsin Chivapruck said.

The BMTA also plans to acquire 200 electrically powered buses and to recondition another 672 buses now in service.

The agency showed off its new bus model on Friday morning. It has a low floor that will make it more accessible to the disabled. The new buses will also have a global positioning system (GSP) to track their movement through the city, and CCTV to monitor drivers’ behaviour. There will be free WiFi for use by passengers.

Mr Omsin said the buses would later be fitted with electronic ticketing systems to link them to the joint mass transit ticket system.

Last November the BMTA scrapped the bidding for the first batch of 489 natural gas-powered buses after finding the terms of reference breached the Administrative Procedure Act. The first tender was won by JVCC Joint Venture. The agency has been planning to replace its ageing buses with a new fleet of 3,183 buses since 2006, with little progress made until now. 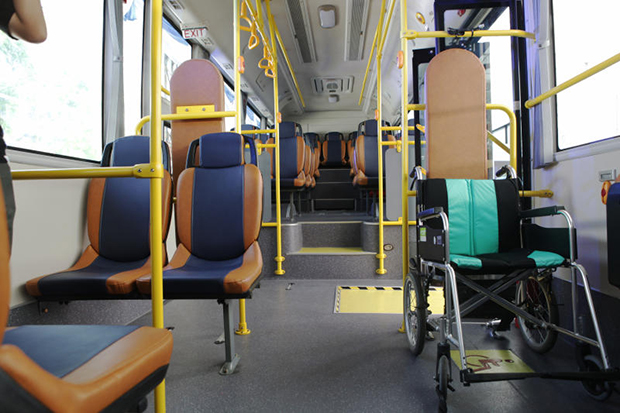 The disabled will have their own space in the new buses. (Photo by Tawatchai Kemgumnerd)