Chinese Public Security Minister Meng Jianzhu led an official delegation from a highly concerned Beijing to Chiang Rai, but was briefed only by police, and not the army, which was directly involved. (Photo by Cheewin Sattha)

Last week, word reached the upper echelons of power that a movie was being released in Hong Kong and the cold sweat was obvious.

Usually, film fans and critics rag producers and directors when a movie "based on real events" bastardises the story. But the extreme agitation at the top of the junta last week was that Operation Mekong would follow the facts.

Spoiler: It doesn't. But you could feel the panicky fear. What really happened from early October 2011, through to March 2013, has been thoroughly scrubbed and washed in both Thai and Chinese records so often that a weird thing happened.

The version of the story in the wildly silly and inaccurate Operation Mekong film is now official history in both countries. That version goes like this.

Early on Oct 5, 2011, heavily armed men employed by amphetamine king and warlord Naw Kham boarded two Chinese tramp boats carrying cargo up and down the Mekong, from northern Thailand to China. All 13 Chinese crewmen were bound, gagged, shot dead and dumped in the Mekong. Over the next 18 months, Thai and Lao police led by Chinese detectives ran an international manhunt that ended in the arrest and extradition of Naw Kham from Laos to Kunming, where he was tried and executed. That's the movie version, punctuated with action, largely blue-screen and CGI.

Time out. This is fine for a movie. The reality is the official slash movie version of the massacre just off Chiang Rai's Chiang Saen district is a disservice to the dead men and to their families, who have been shushed by Chinese authorities.

Dante Lam Chiu-Yin is arguably the best hope for a new John Woo in violent action films and has no responsibility to stick to the truth as he blows up hundreds in his films. On the other hand, the Chinese government should not be ordering up reviews of Operation Mekong at its many internet propaganda sites such as China.org that spit on the facts.

The truth is that the actual killers of the sailors have never been brought to justice. The only group known to have been at the scene was the "elite" anti-drug Pa Muang Task Force. Their own two-star commander even authorised a press release that appeared tucked under the fold of an inside page of the Bangkok Post on Oct 7, 2011.

There was no gunfight. There was no second group. There was no Chinese "help". There were no drug smugglers caught. Two days later, this was verified by the Bangkok Post Sunday, which revealed the massacre and retrieval of 12 bodies (the 13th was found days later) from the Mekong.

Members of the elite Pa Muang Task Force were under investigation as cold-blooded killers, bribed to switch loyalty to ya ba king Naw Kham from his Golden Triangle hideout inside Myanmar. 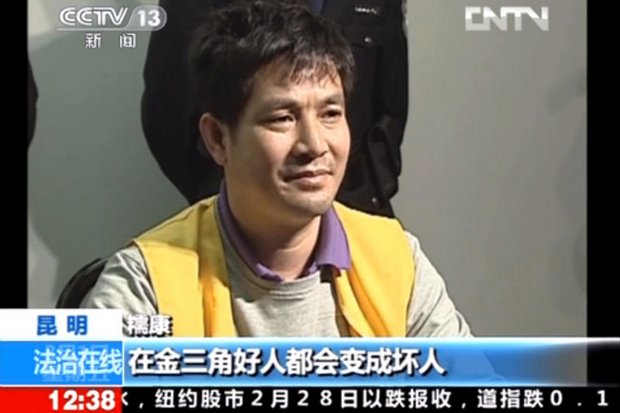 Amphetamine king Naw Kham was abducted by Chinese forces after being located by drones, and his show trial was broadcast on Chinese TV ahead of his execution in March, 2013. (Video grab by AFP)

China went along with this, reluctantly at first, but lately with enthusiasm. Chinese forces for the first time invaded Myanmar and Laos and, with the help of drones, located and abducted Naw Kham. The drug lord was removed to Kunming, where a March, 2013, kangaroo court of Stalinesque proportions condemned him. He was quickly executed. 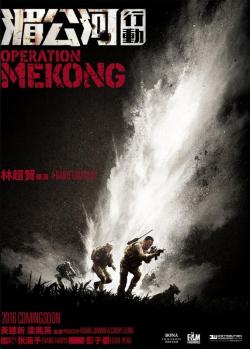 China and Thailand continue to gloss over just where those killers came from. For months, Chinese families of the victims protested, but then they went quiet. On Oct 28, 23 days after the massacre,Thailand "arrested" the nine Pa Muang Task Force soldiers, who have since disappeared from the justice system.

Task Force Pa Muang commander Prakarn Chonlayuth went on to ever greater rank and successes, and last year, as a three-star general, he became 4th Army Region commander, in charge of all troops in the deep South.

When Dante Lam and Chinese backers began promoting Operation Mekong as "the true story" of the massacre -- that is when the tip-top of the military regime panicked and announced that if the film actually did that, it would be banned.

Of course, the movie is far removed from truth. More importantly, Chinese action films are way, way out of fashion in the Bangkok cinema world.

If Prime Minister Prayut Chan-o-cha had said nothing, few would have even noticed this blue-screen CGI potboiler. It would never have played in Thailand cinemas and -- here's the rub -- no one would bother looking for bootleg copies of an undistinguished action flick.

Bear in mind the marketing power of censorship when pirated copies of the Chinese-financed Operation Mekong hit the malls and street kiosks.