SINGAPORE - A Singaporean diver has died after being struck on the chest by stingray in a closed underwater attraction in the city-state, the aquarium's owners said on Wednesday. 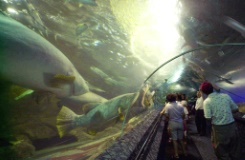 Veteran diver Philip Chan, 62, was stung on Tuesday at Underwater World Singapore in a "tragic accident", while readying stingrays for transfer to another aquarium, the attraction's owners Haw Par Corporation said in a statement.

He later died from the wound in hospital.

The incident brought back memories of Australian celebrity conservationist Steve Irwin, who was killed by a stingray barb in the chest in 2006 during a diving expedition off the Great Barrier Reef.

Haw Par said it has suspended the animal transfer programme while police investigations are underway.

The 25-year-old facility on the resort island of Sentosa shut down in June when it could not keep up with newer attractions on the same island, including a bigger aquarium and water adventure park.

Its pink dolphins, fur seals and otters were moved to the Chimelong Ocean Kingdom in Zhuhai, China, one of the largest marine parks in the world, while its other sea creatures were still looking for new homes, local media reported.

It is unclear which species of stingray struck Chan in the chest.

Stingrays are commonly found in tropical waters and their barbs, at the end of their tails, are coated in toxic venom which they use to defend themselves when threatened.

While the animals' stings are painful, they rarely attack humans.