All television channels -- including international satellite networks -- were replaced with black and white palace broadcasts late Thursday following the death of King Bhumibol. 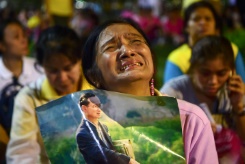 A person holds a photo of Thailand's King Bhumibol Adulyadej as people react to his death on Thursday.

TV networks were ordered to replace their programmes with a prepared rolling state media programme for the next month, said national spokesman Lt Gen Sansern Kaewkamnerd.

All broadcasters must "link to a signal from the TV Pool for 30 days," he said.

As soon as the king's death was announced, domestic stations switched to monochrome pictures and video of the king throughout his 70-year reign.

Satellite channels -- including international news networks like the BBC, CNN and Al Jazeera -- were replaced later in the day with the same programming.

The move means most people cannot access independent news through their televisions.

Thai newspaper websites continue to publishing their own material but had ditched colour.