End of an Era
Thailand
General

End of an Era

"My place in this world is being among my people, the Thai people," His Majesty the King once wrote of his life mission. For the Thai people, our beloved King will always have a special place in our hearts.

Most of us were born under his decades-long reign. We grew up watching him tirelessly devoting his time, energy and money to help the needy across the country. We felt blessed that whenever the country was in trouble, the King was always there to give a little push to get us out of the gridlock, to hold people together.

Amid rapidly changing and sometimes turbulent times, the King became a symbol of stability and continuity. Amid moral decline and social divisiveness caused by greed-driven development and money politics, the King was our centre of honesty and unity.

The people returned his lifelong devotion with love and reverence. And we could not imagine Thailand without him.

Now, we must not only try to overcome our grief, we also must confront a new reality as an important era of Thailand ends and another chapter begins. 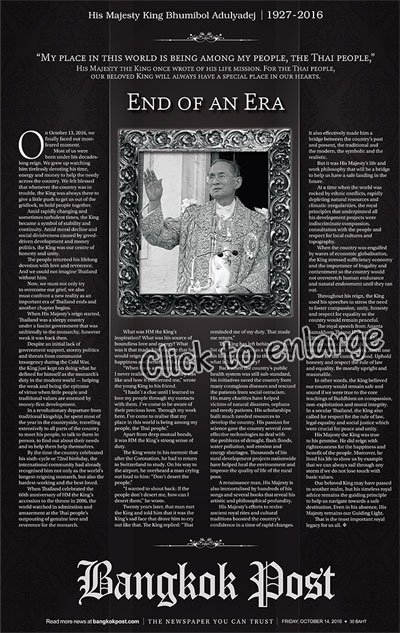 When His Majesty's reign started, Thailand was a sleepy country under a fascist government that was unfriendly to the monarchy, however weak it was back then.

Despite an initial lack of government support, stormy politics and threats from communist insurgency during the Cold War, the King just kept on doing what he defined for himself as the monarch's duty in the modern world -- helping the weak and being the epitome of virtue when little people and traditional values are stormed by money-first development.

In a revolutionary departure from traditional kingship, he spent most of the year in the countryside, travelling extensively to all parts of the country to meet his people, to talk to them in person, to find out about their needs and to help them help themselves.

By the time the country celebrated his sixth-cycle or 72nd birthday, the international community had already recognised him not only as the world's longest-reigning monarch, but also the hardest-working and the best-loved.

When Thailand celebrated the 60th anniversary of HM the King's accession to the throne in 2006, the world watched in admiration and amazement at the Thai people's outpouring of genuine love and reverence for the monarch.

What was HM the King's inspiration? What was his source of boundless love and energy? What was it that made him declare that he would reign with righteousness for the happiness and benefit of the people?

"When I was a student in Europe, I never realised what my country was like and how it concerned me," wrote the young King to his friend.

"I hadn't a clue until I learned to love my people through my contacts with them. I've come to be aware of their precious love. Through my work here, I've come to realise that my place in this world is being among my people, the Thai people."

Apart from deep mutual bonds, it was HM the King's strong sense of duty.

The King wrote in his memoir that after the Coronation, he had to return to Switzerland to study. On his way to the airport, he overheard a man crying out loud to him: "Don't desert the people."

"I wanted to shout back: If the people don't desert me, how can I desert them," he wrote.

Twenty years later, that man met the King and told him that it was the King's sad face that drove him to cry out like that. The King replied: "That reminded me of my duty. That made me return."

The King has left behind him a long list of achievements as a testament of his lifetime devotion to the people. But what is his real legacy?

Back when the country's public health system was still sub-standard, his initiatives saved the country from many contagious diseases and rescued the patients from social ostracism. His many charities have helped victims of natural disasters, orphans and needy patients. His scholarships built much needed resources to develop the country. His passion for science gave the country several cost-effective technologies to deal with the problems of drought, flash floods, water pollution, soil erosion and energy shortages. Thousands of his rural development projects nationwide have helped heal the environment and improve the quality of life of the rural poor.

A renaissance man, His Majesty is also immortalised by hundreds of his songs and several books that reveal his artistic and philosophical profundity.

His Majesty's efforts to revive ancient royal rites and cultural traditions boosted the country's confidence in a time of rapid changes. It also effectively made him a bridge between the country's past and present, the traditional and the modern, the symbolic and the realistic.

But it was His Majesty's life and work philosophy that will be a bridge to help us have a safe landing in the future.

At a time when the world was rocked by ethnic conflicts, rapidly depleting natural resources and climatic irregularities, the royal principles that underpinned all his development projects were indiscriminate compassion, consultation with the people and respect for local cultures and topography.

When the country was engulfed by waves of economic globalisation, the King stressed sufficiency economy and the importance of frugality and contentment so the country would not overstretch human endurance and natural endowment until they ran out.

Throughout his reign, the King used his speeches to stress the need to foster compassion, unity, honesty and respect for equality so the country would remain peaceful.

The royal speech from Ananta Samakhom Throne Hall on June 9, 2006, was a crystalisation of his lifetime advice: Think, talk and act with compassion for others. Assist one another for the common good. Uphold honesty and respect the rule of law and equality. Be morally upright and reasonable.

In other words, the King believed our country would remain safe and sound if we were true to the core teachings of Buddhism on compassion, non-exploitation and moral integrity. In a secular Thailand, the King also called for respect for the rule of law, legal equality and social justice which were crucial for peace and unity.

His Majesty the King was true to his promise. He did reign with righteousness for the happiness and benefit of the people. Moreover, he lived his life to show us by example that we can always sail through any storm if we do not lose touch with basic values.

Our beloved King may have passed to another realm, but his timeless royal advice remains the guiding principle to help us navigate towards a safe destination. Even in his absence, His Majesty remains our Guiding Light.

That is the most important royal legacy for us all. 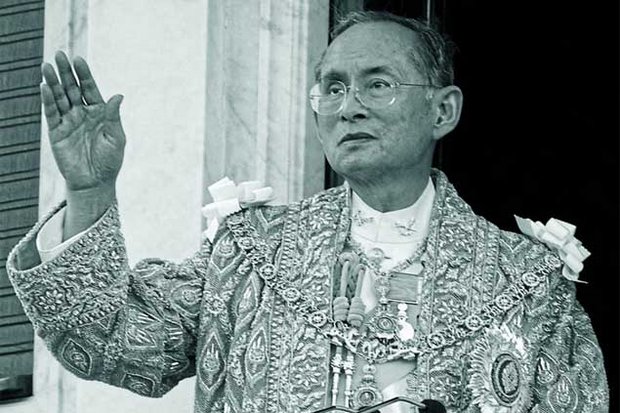