Black-clad mourners filled Sanam Luang to capacity on Saturday for an emotional performance of the royal anthem <i>Sansoen Phra Barami</i> in remembrance of the late King Bhumibol Adulyadej.

Police said more than 150,000 people occupied Sanam Luang and side streets in advance of the afternoon spectacle, which began at 1pm as scheduled. More people were expected to continue arriving ahead of a second performance scheduled for Saturday night.

The historic mass singing event was being filmed by the national artist and filmmaker MC Chatrichalerm Yukol. A 100-piece orchestra and a 100-member professional choir conducted by Somtow Sucharitkul accompanied the mass of amateur voices offering their most heartfelt tribute.

The film of Saturday's event is expected to be ready for screening on television and in cinemas by next week.

Bird's-eye view live camera footage showed a remarkable scene on the royal ground, with nothing but black visible as far as the eye could see.

Estimates of the crowd size varied. Authorities said earlier that Sanam Luang itself could hold about 100,000 people. The Internal Security Operations Command estimated the crowd in the area at 177,000, while the Bangkok police chief put the number at 300,000.

Crowds assembled calmly and followed directions as they assembled near the majestic Grand Palace. Most had arrived via shuttle buses arranged for the occasion from shopping centres and other public sites on the periphery of the city. More roads around the Grand Palace have been closed in order to accommodate mourners.

Many of the participants were in tears as they sang, raising portraits of the late King or clutching banknotes bearing his image.

Mourners from outside Bangkok arrived at the Grand Palace via all kinds of transport. Authorities were operating free trains, buses and boats to accommodate the influx.

"I came here to sing a song and pay my last respects to his majesty the late king," mourner Chotika Pattanateeradej told AFP. "Many people have come today and they are helping each other. I feel very proud."

"I wanted to be here to pay respects to His Majesty," said Haysri Watanakulpipat, 47, who said she drove overnight from Prachin Buri.

MC Chatrichalerm said he was deeply grateful to all the participants and organisers of the event. His crew was using 25 cameras, 25 microphones, three cranes and two drones to capture the moment.

The filming was planned to continue with repeated rounds of singing until 5pm in order to obtain the best selection of material.

At 10pm participants will hold lit candles and sing the anthem without accompanying music for another round of filming intended to capture the feelings of the public over the passing of the King. 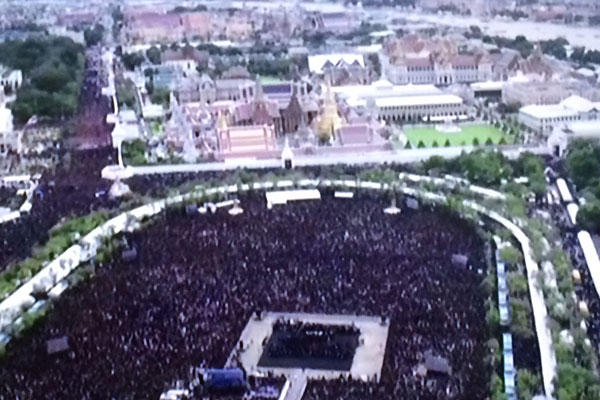 Hundreds of thousands of black-clad mourners in Sanam Luang surround the stage where a 100-piece orchestra was also taking part in the performance of the royal anthem.