Flooding hits 800 households in the West

A resident of Kanchanaburi's Dan Makhamtia district pushes her bicycle through the muddy floodwater in her community on Tuesday. (Photo by Piyarach Chongcharoen)

Flash floods triggered by days of heavy rain have swamped at least 800 houses and large areas of farmland, and closed roads, in parts of Kanchanaburi and adjoining Ratchaburi provinces in the west of the country.

In Kanchanaburi, the downpour caused flooding in three villages in Huay Krachao district.  A total of 82 households were affected.

Kakit Prakobtham, charman of Don Salaeb tambon admistration organisation, said although homes were flooded, the deluge was good for the paddy fields, which were drying out for lack of water.

Most local people were rice farmers and were delighted when the rain arrived. However, farmers whose rice was already in flower had suffered damage to their crops, he said.

In Dan Makhamtia district, overflow from a major reservoir in Ratchaburi province’s Suan Phung and runoff from the Tanao Sri mountain range swept into 36 villages.  A total of 720 households were affected and more than 1,000 rai of farmland damaged. Sixty-four roads in the district were flooded.

Suraporn Chansunthornpot,  assistant chief of Dan Makhamtia, said district authorities had asked  for help  from the military and a rescue foundation to evacuate residents in areas worst hit.

In Ratchaburi,  the Mae Klong River burst its banks on Tuesday, flooding many riverside houses and farmland in Photaram district

Workers from Photaram municipality raced against time to move equipment from a stage set up for activities to mourn the passing of  King Bhumibol as overflow from the river flooded into many areas near Photaram dam.

Theera Untha-on, head of the water allocation project in Ratchaburi, said the provincial disaster prevention and mitigation office was warning people in communities along the Mae Klong River to move their belongings to higher ground and closely monitor the weather forecasts. 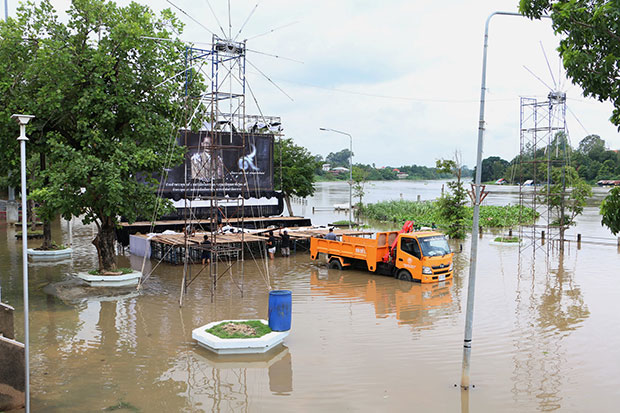 Organisers raced to clear equipment from this stage set up for mourning activities for the late King as the Mae Klong River burst its banks in Photaram district of Ratchaburi on Tuesday. (Photo by Saichon Srinuanjan)