Rice millers board quits for failing to help farmers

The president and executives of the Thai Rice Millers Association have resigned, saying they have failed to help farmers and been unable to push up grain prices.

President Manas Kitprasert made the announcement at a briefing on Thursday morning.

At the briefing on Thursday, Mr Manas denied the allegations, saying millers had never pushed down prices nor worked with politicians.

“In fact, we're not the ones who set paddy prices. That's the role of exporters because they sell to end buyers,” he said.

The association’s executives earlier submitted information about the falling rice prices to the government. However, Mr Manas said there might be some "misunderstanding" that led the prime minister to think that the millers had worked with politicians by refusing to buy the grain from farmers.

He insisted the millers worked on the principle of supporting all governments, giving priority to farmers and not getting involved with politics.

They claimed they had never stopped purchasing paddy from farmers. In fact, they borrowed from commercial banks with a credit line of over 80 billion baht to buy more than eight million tonnes of paddy while the government helped subsidise only three percentage points of the loan interest rates.

Mr Manas urged the public to understand the millers. The 38-year-old association has more one thousand members in 50 provinces.

Amid an outcry by farmers who complain they cannot sell rice to millers, many growers have tried to sell rice directly to consumers.

According to Thai media, former prime minister Yingluck Shinawatra on Thursday visited farmers in Ubon Ratchathani where a group of around 20 farmers joined hands to mill and sell three tonnes of fragrant rice directly to consumers in front of a school in tambon Nai Muang of Muang district.

The farmers told Ms Yingluck that millers gave them up to seven baht a kilogramme for the grain. The price would be 10% lower if the produce had a high humidity.

This led them to dry and mill the grain, as well as sell it themselves at 20 baht a kilo. That price not only covers their costs but also gives them a profit of five baht a kg.

Luck Wajananawat, president of the Bank for Agriculture and Agricultural Cooperatives, said the government would use over 126 billion baht to shore up the paddy prices for the 2016/17 harvesting season.

Of the total, 80 billion baht would be a credit line to millers to purchase the rice and build stocks for three to six months. The government will subsidise three percentage points of the interest rates during the stock-building period.

Another 46.7 billion baht will be spent on the projects aimed to delay the influx of fragrant rice into the market with the target to stock two million tonnes of paddy or 20% of the estimated output of 10 million tonnes.

The cabinet on Tuesday approved the rice subsidy scheme at up to 13,000 baht per tonne of hom mali paddy, to stem protests from rice farmers dissatisfied with the earlier proposed subsidised price of 11,525 baht.

In Phitsanulok, around 30 soldiers help harvest rice in the flooded five-rai field owned by Tuad Somnate in Bang Rakam district to minimise the damage. 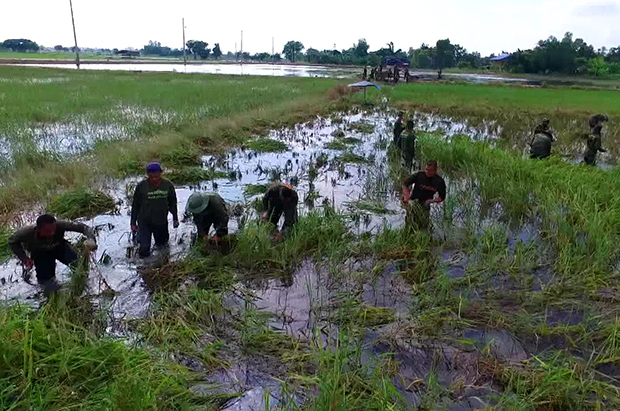 Soldiers help harvest the rice in a flooded field in Phitsanulok on Thursday. (Photo by Chinawat Singha)