CHIANG MAI -- A fire at the Tarin Hotel in the heart of the city early on Monday sent nearly 200 guests, most of them Chinese tourists, fleeing for their lives. 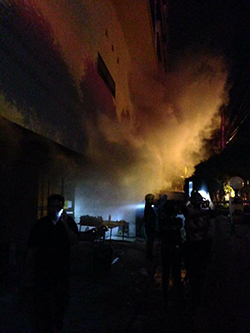 Photo of the fire at the Tarin Hotel taken by Mike Mahawong Khon Su Fai and posted on the Facebook page of the Disaster Prevention and Mitigation of Makham Luang Tambon Administration Organisation.

The fire started about 2.30am in the laundry room on the basement floor of the hotel, on Chiang Mai - Lampang Road, Pol Capt Patarapop Thanomkankul, a duty officer at Chang Phuak police station in Muang district, said.

As thick smoke billowed from the basement floor, the electricity in the hotel cut off and the fire safety alarm rang incessantly, as some 200 guests from the 7th floor down to ground level fled the building.

About 18 guests on the 6th and 7th floors ran up to the hotel rooftop after they were unable to go down the fire escape stairs because of the thick smoke. Firefighters from Chiang Mai Municipality took rescue gear up to the rooftop and helped them down to safety.

A Thai woman staying at the hotel was treated for smoke inhalation and admitted to Maharat Nakhon Chiang Mai Hospital.

There were no other injuries, but the fire damaged part of the hotel before it was extinguished. The damage had yet to be assessed.

Twelve fire engines from Chang Phuak and Nakhon Chiang Mai municipalities fought the flames and put out the fire in about an hour. All guests were assisted away from the hotel to safety by about 3.45am.

The hotel management contacted other hotels to accommodate its guests.

Pol Col Piyaphan Patarapongsin, deputy chief of Chiang Mai police, said the cause of the fire was being investigated.  It was initially believed to be sparks from an electrical short-circuit.