Motorists and commuters who use Ratchadaphisek Road and Phahon Yothin Road are being urged to plan their journeys as the Ratchayothin intersection flyover will be closed ahead of its demolition to make way for construction of the Green Line railway extension. 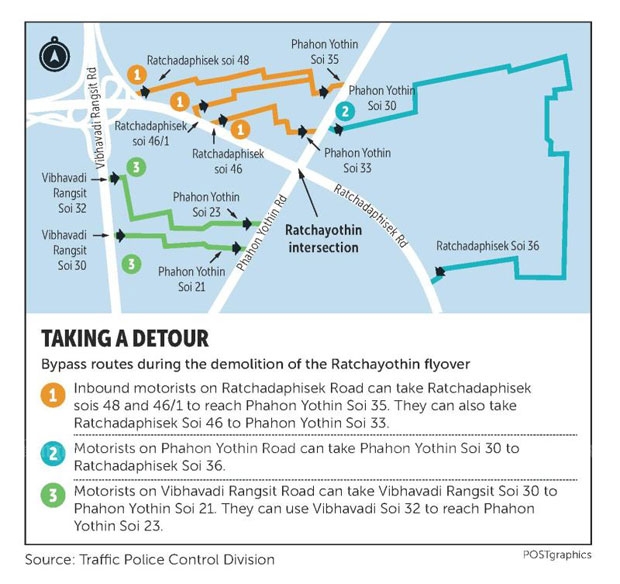 Phahon Yothin traffic police will start a trial closure of the Ratchayothin intersection flyover from Nov 22-26. The demolition work will start on Nov 27 and is expected to be completed in two months.

Pol Maj Gen Jirapat Phumjit, acting deputy commissioner of the Metropolitan Police Bureau, said police are working on a diversion plan near the intersection to ease congestion that will be caused by the trial closure and demolition.

He was speaking after a meeting with a team of traffic police to divert traffic near the intersection.

Motorists who use Ratchadaphisek Road and Phahon Yothin Road will be affected by the closure and demolition and can expect heavy congestion during the work.

Construction work for a tunnel that will replace the flyover will take about two years to finish, according to authorities.

The flyover's demolition will have an impact on the nearby Major Ratchayothin and Central Latprao malls as well as students travelling to Kasetsart University.

New mother Siriporn Sinsamersuk said the roadworks would cause some inconvenience on her daily commute and be a major headache whenever she wanted to visit her parents.

"Hopefully they stick to their promise and get things sorted out in the time they promised, because it means I have to go a really long way around," she said.

"And they are building the extension to the Green Line in Saphan Mai, which is causing congestion at the other end. It should be good when it's finished, but I wish the traffic wasn't so bad."

The new Green Line section, to be operated by the Bangkok Transit System and Bangkok Metropolitan Administration, is part of the 18.4km northern extension linking Mor Chit, Saphan Mai and Kukot.