Thais hold off Aussies to draw 2-2

In an emotional Tuesday evening, Thailand put up a great fight to draw 2-2 with Australia in a World Cup qualifier at Rajamangala National Stadium.

It was one of Thailand's best results in recent memory and gave them their first point in Group B of Asia's third qualifying round for the 2018 World Cup.

On the other hand, the result shattered the Socceroos' hopes of advancing to the 2018 finals. 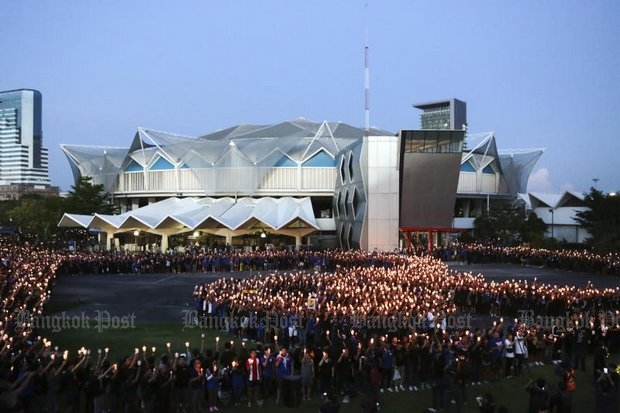 Thai fans held up candles in a tribute to King Bhumibol outside Rajamangala National Stadium ahead of the World Cup qualifier against Australia Tuesday night. (Photos by Patipat Janthong)

Thailand coach Kiatisak Senamuang had vowed to get a result for King Bhumibol Adulyadej, who passed away last month, and his men did just that.

Ahead of the game, local fans held a candle-lit mourning event for the beloved monarch outside the stadium, while players of both teams wore black armbands.

In a see-saw match, the Socceroos went ahead after just eight minutes when Thailand defender Prathum Chuthong handled the ball in the area and Mile Jedinak opened the scoring from the resulting penalty.

Striker Teerasil Dangda equalised for the Thais after 20 minutes when he tapped in a cross to Tristan Do.

The War Elephants stunned the Aussies again in the 55th minute when Teerasil scored from a penalty after Theerthon Bunmathan was fouled by Milos Degenek. In the other Group B game, in Saitama, Japan edged Saudi Arabia 2-1.

A first-half penalty from Hiroshi Kiyotake and Genki Haraguchi's goal with 11 minutes remaining gave the Japanese a much-needed win.

Omar Hawsawi scored for Saudi Arabia with a minute left.

Saudi Arabia captain Osama Hawsawi was sent off for a clumsy challenge in injury time.

After five matches, Japan and Saudi Arabia each have 10 points, followed by Australia on nine points.

The top two teams of Group A and Group B automatically qualify for the 2018 World Cup. The two third-place teams meet in a play-off with the winners facing a Concacaf team for another berth.

Thailand should look beyond tourism and make the transition to a digital economy to generate more revenue for the country, Jirayut Srupsrisopa, the founder and CEO of Bitkub Capital Group Holdings, said on Thursday.

The Thai women's volleyball team lost 3-1 to the Dominican Republic on Thursday as their hope to play in the finals is now in jeopardy.