The illegal seafront swimming pool, built 21 years ago at what became the Golden Cliff House Hotel and encroaches on the sea. (Photo by Chaiyot Pupattanapong)

PATTAYA -- The Golden Cliff House Hotel, which has an illegal swimming pool that has encroached on the sea for the past 21 years, will close on Nov 25, the operator, Watthanan Yimlamai, has announced.

The decision came after marine authorities in Pattaya last week filed a complaint with police accusing the hotel of breaching the Navigation in Thai Waters Act, which prohibits building of structures that encroach on any body of water without permission.

Officials inspected the hotel on Nov 16 and found that some structures, including a 26 x 30 metre pool, were built without permission from the Marine Department. 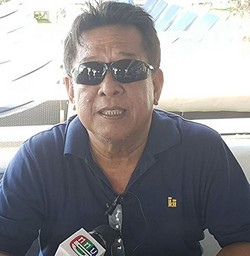 The hotel in Khao Phra Tamnak area of tambon Nong Prue in Chon Buri's Bang Lamung district was also found to have been operating without a licence.

Google Maps images showing the seafront pool jutting into the sea along Yim Yom beach had earlier been posted on the social media.

A notice was put up at the site, instructing the hotel operator to demolish the pool within 15 days and suspending the business until a proper operating licence had been obtained.

Mr Watthanan, 64, said the hotel was in the past a house.  It was expanded by the landowner as an apartment building in 1995, when the swimming pool was also built.

When the hotel law was enforced in 2007, the apartment was converted into a hotel and the owner filed for an operating licence, which was refused because it lacked some requirements. Regardless, the hotel remained in operation without a permit.

Mr Watthanan said he took over the hotel's operation in 2015 under a lease contract, with 47 rooms and the controversial swimming pool.

On receiving the notice last Wednesday, Mr Watthanan said he was looking for a contractor to demolish the swimming pool.  The demolition would take time to complete and would cost an estimated 1 million baht.

Mr Watthanan said he had now decided to terminate the lease and close the business from Nov 25. He  would pay compensation to his employees as required by the law.

He did not know if the landowner would apply for an operating licence and reopen the hotel. 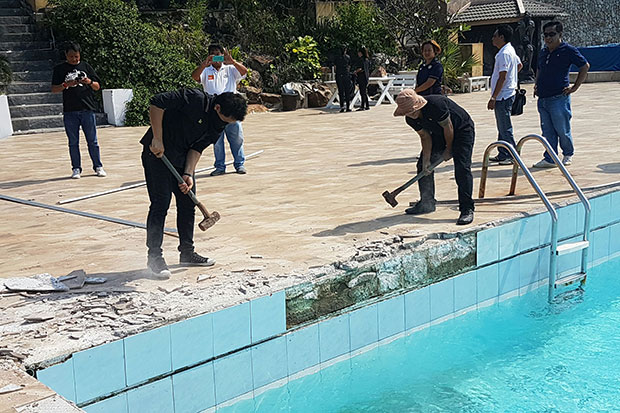 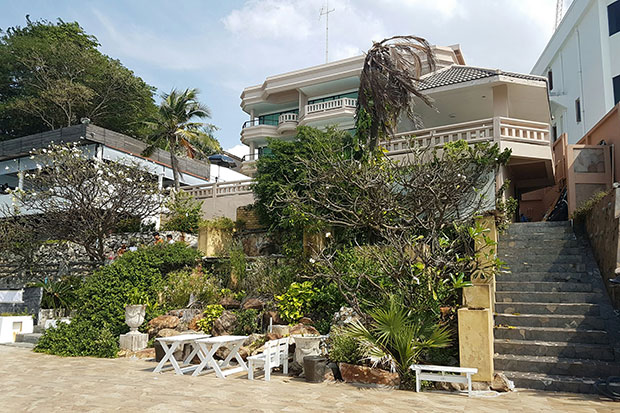 The curtain will close on the Golden Cliff House Hotel on Nov 25 after it was found to be operating without a licence and its swimming pool encroached on the sea. (Photo by Chaiyot Pupattanapong)