Family of 3 missing after barge sinks off Koh Tao

The man (left) and two children are among eight people rescued from barges swamped by wind-whipped seas in Surat Thani on Wednesday night. One of the barges capsized 10 nautical miles off Koh Tao. A mother, father and three-year-old child were still missing. (Photo by Supapong Chaolan)

SURAT THANI - The search continued on Thursday for a family of three missing since their cargo barge was swamped by wind-whipped seas and sank about 10 nautical miles off Koh Tao on Wednesday night.

The missing mother, father and three-year-old child were on the barge when it capsized shortly after a wave reported to be five metres high hit six vessels sheltering behind an offshore gas drilling platform between Koh Tao in Surat Thani’s Koh Phangnan district and Lang Suan bay in Luang Suan district of Chumphon.

The six vessels, two tug boats and four barges carrying rubberwood chips, had left Tapee River in Surat Thani’s Muang district to deliver their cargo to a factory in Chachoengsao’s Bang Pakong district, said Wassana Saithongkham, a crew member of one of the tugs.

“On the way, we heard the Meteorological Department’s weather forecast, warning that there would be strong waves. We tried to seek shelter near Koh Tao, but the ropes attached to the third barge were suddenly torn off," Ms Wassana said.

"Only two of the barges were still attached to the tug boats, leaving the other two barges alone in the sea. The fourth barge was hit by a powerful wave and then sank. The missing family was on that barge," she said.

Rescuers found and saved eight people cast into the sea - three men, two women and three children. With the waves running as high as 4-5 metres, and strong winds, the search was then called off. It resumed on Thursday.

An air force plane searched the area in the morning but failed to find any sign of the missing people, Surat Thani governor Ouaychai Innak said. The navy's Second Fleet, based in Songkhla, sent a patrol ship to sea to join in the search.

The Meteorological Department forecast on Wednesday night was for wind-whipped waves 2-3 metres high in the Gulf of Thailand from Surat Thani southward. Small boats were advised to remain ashore. 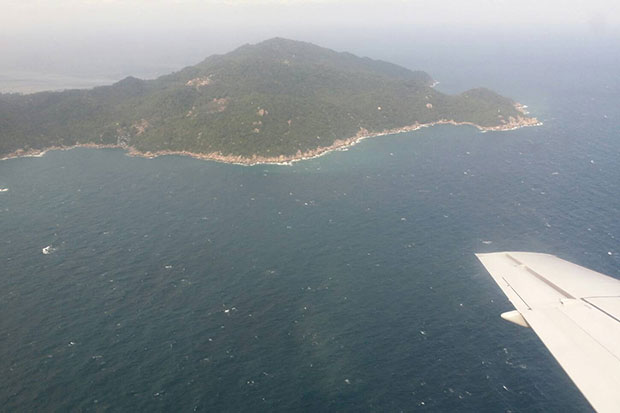 The area where the barge capsized, taken from a search plane on Thursday morning. (Photo by Supapong Chaolan) 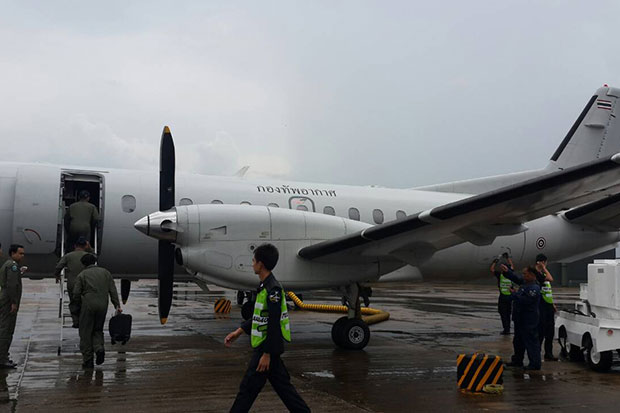 The Surat Thani governor and air force officers board a plane on Thursday to search the area where the barge capsized. (Photo by Supapong Chaolan)