A demand by wanted abbot Phra Dhammajayo that he be immediately granted bail when be surrenders to the authorities has been knocked back by the Department of Special Investigation as it does not have that authority.

DSI chief Paisit Wongmuang on Saturday revealed the demand was made in negotiations on Friday involving representatives of Wat Phra Dhammakaya, the DSI and officials from the National Office of Buddhism. 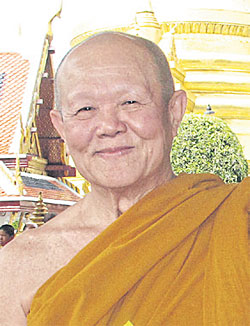 Mr Paisit said the DSI rejected the condition as the case involves an indictment by the Office of the Attorney General over the laundering of 12 billion baht from Klongchan Credit Union.

Only public prosecutors have the authority, he said.

The abbot has faced arrest since June when DSI officials attempted to enter Wat Dhammakaya but were met by hundreds of Dhammajayo supporters who blocked the gates with heavy construction machinery.

Pressure has been mounting on the DSI to bring Phra Dhammajayo in for charging, while complaints have been lodged against the temple's acting abbot for providing shelter to a criminal suspect.

The complaint was filed by the Natural Resources and Environmental Crime Division against Phra Thattacheevo, also known as Phra Ratchapaowanajarn, after the deadline expired on Friday for Phra Dhammajayo to report to investigators in connection with a forest encroachment case in Nakhon Ratchasima.

The monk had until Friday to surrender to officers.

With no sign of the monk, the anti-environment crime officers went to Khlong Luang police station in Pathum Thani and filed the complaint against Phra Thattacheevo, accusing him of violating Section 189 of the Criminal Code by aiding the suspect.

Authorities held talks earlier with representatives of the temple regarding conditions for the monk's surrender and other legal procedures, he added.

He said the acting abbot, who is considered a state official, would also face a charge of malfeasance in office.

He said he submitted to Khlong Luang police as evidence photos, documents and video clips by Ong-art Thamnitha, who represents Phra Dhammajayo's disciples.

On Nov 24 Mr Ong-art gave an interview that the abbot was still at the temple, but Phra Maha Nopporn Punyajayo, assistant director of Wat Phra Dhammakaya's communications team, on Wednesday refused to confirm it, saying he had not visited the former abbot for several months.