A notice orders Wat Phra Dhammakaya to clear all structures from its three canal bridges and to reopen them for public use. The temple also faces legal action for building three other bridges without permission. (Photo by Apichit Jinakul)

Three more bridges being built by the sect were also ruled as illegal by officials.

The bridges which have been closed to traffic recently were built for vehicles to cross an irrigation canal between tambon Khlong 3 and tambon Khlong 4 in Khlong Luang district, and to assist visitors to the temple.

Officials from Royal Irrigation Department and the Treasury Department led by Chuchart Supwattanarngkul, an adviser to the Pathum Thani governor, on Sunday posted banners on the foundation pillars of one of the blocked bridges near the temple’s Gate 4 on Sunday.

Each sign had a message that read, “This bridge is built on state land for the benefit of the public. Anyone blocking access to the general public will be subject to legal action.”

Mr Chuchart said authorities had allowed Wat Phra Dhammakaya to build the bridges on condition that once construction is complete they would be open to public use.

However, the bridge near Gate 4 was being blocked by concrete barriers and manned by temple monks and security guards, with tents being set up in the middle section of the structure as well as a security camera. (Story continues below) 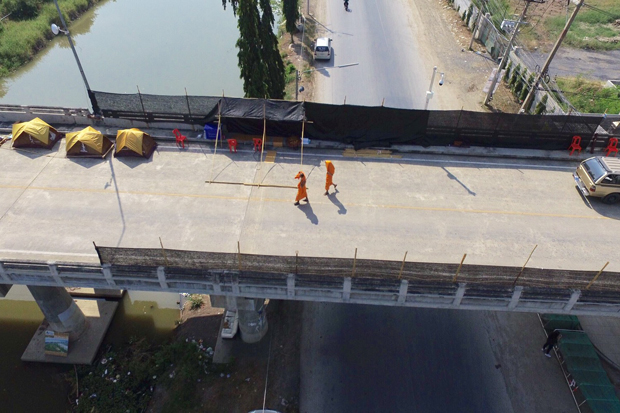 The controversial temple had also started constructing three elevated bridges between the Khlong 4-Khlong Luang Motorway and the temple while permission was still pending.

Officials have put up the vinyl banners at four of the six bridges.

On Thursday, Mr Chuchart, representing the Pathum Thani province, filed a complaint with Khlong Luang police alleging misuse of the structures. The complaints were laid against several individuals who had filed requests for the bridge construction projects on the temple’s behalf. Documents showed the temple’s acknowledgement in transferring ownership of the canal bridges to the public.

Meanwhile, Ong-art Dhammanitta, a spokesman for Wat Phra Dhammakaya, released a statement claiming the temple and its disciples have been treated unfairly by law enforcement officers in several cases.

Mr Ong-art said a charge of illegally soliciting donations brought against the temple’s disciples in the multi-billion-baht Klongchan Credit Union Cooperative embezzlement case was intended to bully them and was therefore unfair.

He claimed the Natural Resources and Environmental Crime Division used opinions from a disqualified satellite imagery analyst to back up its forest encroachment cases in Nakhon Ratchasima and Loei provinces against the temple and its abbot Phra Dhammajayo.

Action taken to stop the broadcast of the temple’s satellite TV channel, DMC, was also carried out without an inquiry and sufficient evidence, he added.