Pathum Thani: A Wat Phra Dhammakaya spokesman has warned the situation will "get out of control" if authorities go ahead with a plan to raid the temple and arrest its former abbot who is wanted on money laundering and forest encroachment charges.

Ong-art Thamnitha, who represents Dhammakaya's disciples, said authorities have treated the temple and its former abbot unfairly, and there are signs violence will break out between state authorities and the institution of Buddhism.

He made the remarks at a media briefing at the temple in Pathum Thani's Khlong Luang district Sunday as police and the Department of Special Investigation (DSI) prepare to meet again Monday to discuss a plan to arrest the embattled former abbot Phra Dhammajayo. 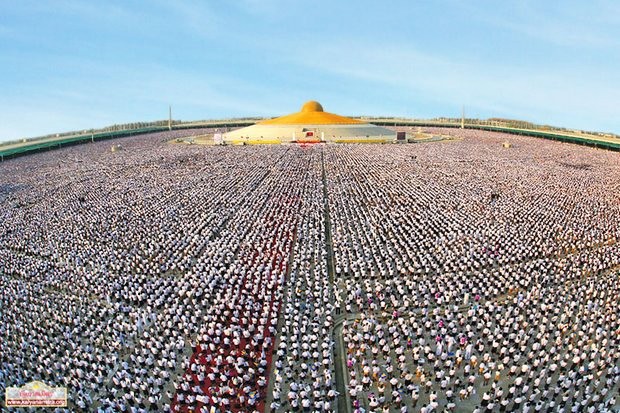 A spokesman for these disciples of sect leader Phra Dhammajayo says they will resist a rumoured military-police raid and, 'There will be deaths and injuries'. (Photo via Dhammakaya Foundation)

He claimed media reports have emerged that more than 3,000 officers from the DSI, the police force, and soldiers are prepared to raid the temple.

The operation will be supported by helicopters, police dogs, and water cannon trucks while nearby hospitals have been told to prepare for any emergencies, Mr Ong-art said.

This shows that authorities will use force against the temple's disciples who are gathering for prayers and mediation at Wat Dhammakaya, out of concern for Phra Dhammajayo. 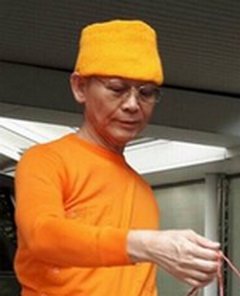 "The operation could cause many deaths and injuries, and would become a major scandal ruining the country's reputation," Mr Ong-art said.

He said the issue is sensitive and could hurt the feelings of millions of Buddhist people.

"I want authorities to consider it carefully. If anything happens, I can't tell disciples to obey me because there are millions of them," Mr Ong-art said.

The plan will involve about 2,250 police officers, and 150 officers from the DSI, supported by soldiers and other agencies.

"The operation will start at dawn Tuesday, with DSI deputy chief Suriya Singhakamol expected to be assigned to oversee the operation," the source said.

On May 17, the Criminal Court approved an arrest warrant for Phra Dhammajayo for alleged involvement in money laundering and receiving stolen property in connection with the multi-million-baht Klongchan Credit Union Cooperative embezzlement scandal. The case was investigated by the DSI.

The DSI made its first attempt to arrest the former abbot at Wat Phra Dhammakaya on June 16 where he is allegedly holed up but failed as his followers gathered en masse and blocked authorities from entering.

The Sikhiu Provincial Court approved a warrant on Nov 17 for the arrest of the former abbot for alleged forest encroachment by the temple's World Peace Valley Meditation Centre at Khao Yai National Park in Nakhon Ratchasima's Pak Chong district.

The monk also faces an arrest warrant issued by the Loei Provincial Court on Aug 15 after a police probe found Wat Dhammakaya's meditation facility in Loei's Phu Rua encroached on a forest reserve.

Foreign Buddhist organisations on Sunday asked Prime Minister Prayut Cha-o-cha to make sure that no force will be used against Wat Dhammakaya. 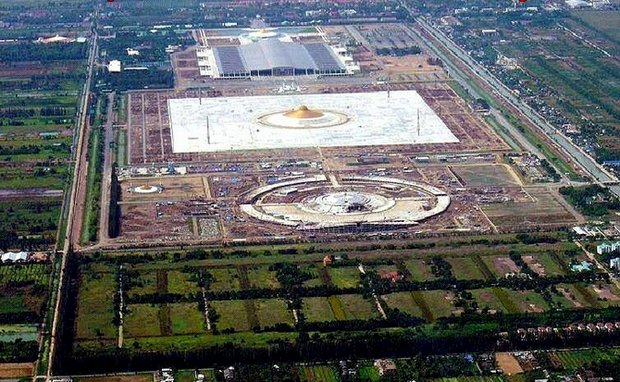 This aerial view shows just part of the Wat Phra Dhammakaya compound, illustrating the scope of the problem officials face if they go ahead with plans to actually raid the facility. (Photo via Slideshare.net)

In a open letter to Gen Prayut, Sabuj Barua, president of the Nirvana Peace Foundation based in Bangladesh, asked the prime minister to take necessary steps to protect Phra Dhammajayo as well as Buddhism in Thailand.

Mr Barua said Phra Dhammajayo has been dedicated to spreading the message of Buddhism and peace for Thailand and all over the world.

Mr Barua said the DSI has threatened to use force to arrest the former abbot.

"This type of action is contradictory to the Buddhist way," he said.

He also disagreed with the order suspending the temple's satellite TV channel, DMC, saying it violates the public's right to information.

Shasan Rakkhit Mahathero, the abbot of Panchari Shantipur Aranya Kutir in Bangladesh and a member of the World Theravada Buddhist Sangha Council, said in a open letter to Gen Prayut that if the DSI and the police raid Wat Dhammakaya, temples all over the world will be affected.

It is not a good example to raid a temple with heavy weapons, the monk said.

Photo below: The Irrigation Department has put up signs on Khlong 3 (above) and other roads leading to Wat Phra Dhammakaya through Pathum Thani's Khlong Luang district, warning temple disciples against blocking travel. (Photo by Apichit Jinakul) 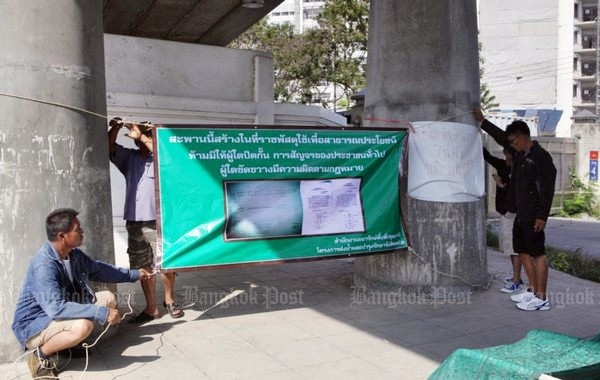