The Department of Special Investigation (DSI) and police admit they are having problems agreeing on an operation plan to raid Wat Phra Dhammakaya and arrest its former abbot after a five-hour meeting on Monday failed to reach any conclusion.

Speaking after a meeting with the DSI to discuss plans to arrest the embattled former abbot Phra Dhammajayo, deputy national police chief Srivara Ransibrahmanakul said the police and the DSI were still working out the details.

Authorities are still facing problems assembling personnel, particularly those responsible for gathering forensic evidence. They need to be sure enough evidence is gathered before seeking a search warrant from a court, he said.

They must finalise the plan and then explain to the court the steps involved in the operation as well as report the results to the court, Pol Gen Srivara said.

"Authorities need some time to prepare and will launch the operation as soon as they are ready," Pol Gen Srivara said.

Asked if the DSI and police can carry out the plan this week, Pol Gen Srivara said: "It depends on the DSI chief, the timing and if there is an opportunity."

Phra Dhammajayo is wanted on charges of alleged involvement in laundering money and receiving stolen property in connection with the multi-billion-baht Klongchan Credit Union Cooperative embezzlement scandal. The case was investigated by the DSI.

The monk is also the subject of arrest warrants issued by the Sikhiu and Loei provincial courts in connection with alleged forest encroachment in the two northeastern provinces. (Story continues below) 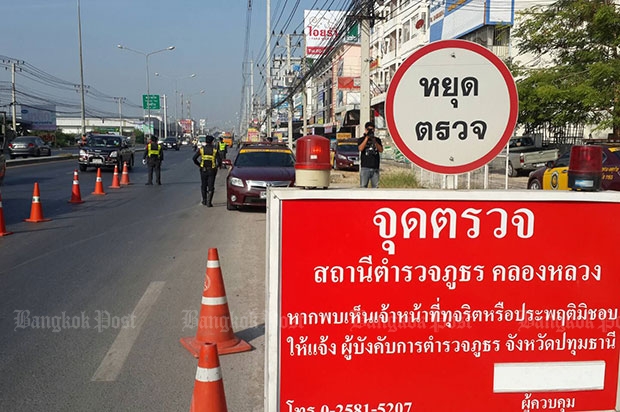 Above: A police checkpoint is set up on a road leading to Wat Phra Dhammakaya in Pathum Thani on Monday, and (Below) A van is stopped to check a monk and disciples of sect leader Phra Dhammajayo. (Photos by Pongpat Wongyala) 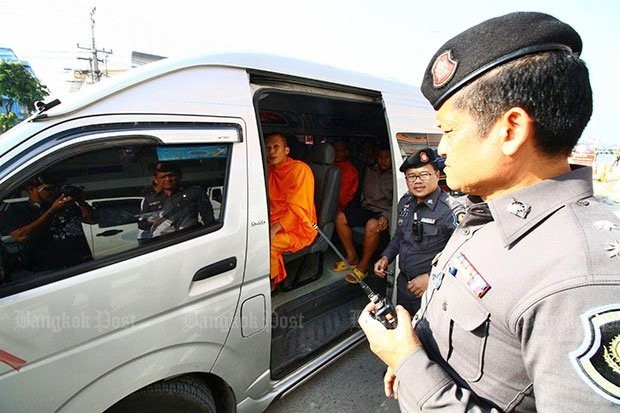 Pol Gen Srivara said people would not be prevented from entering Wat Phra Dhammakaya, but security forces have been deployed around the temple to ensure their safety.

He said the police are responsible for providing support to the DSI in its operation to arrest the former abbot.

It is up to the national police chief to decide whether to allow police to lead the raid on the temple and open the way for the DSI to apprehend the former abbot, Pol Gen Srivara said.

He also countered a claim by Wat Phra Dhammakaya spokesman Ong-art Thamnitha that about 3,000 police have been deployed to raid the temple.

Pol Gen Srivara said most police officers involved in the operation plan are non-commissioned officers, who do not have the authority to carry out a search as stipulated by Section 97 of the Criminal Procedure Code.

Police officers who are authorised to execute the search warrant must be at least sub-lieutenants, according to the law. There are not enough of them in the forces deployed, Pol Gen Srivara said.

"Police will not use any weapons during the search. But people should not behave like villains. The law applies equally to everyone," Pol Gen Srivara said.

He said officials have been asked to maintain peace and order and prevent any third party from causing unrest. He added those who obstruct the operation will face legal action.

At the same media briefing, DSI director-general Paisit Wongmuang reiterated the deputy police chief's words, saying the DSI must present a map and details of the operation to the court when seeking a search warrant.

Pol Col Paisit said he could not disclose details of when the search would be carried out and whether it would continue for several consecutive days.

Meanwhile, disciples of Wat Phra Dhammakaya continued to flock to the temple in large numbers Monday, following reports of an imminent raid.

Police set up checkpoints along the roads leading to the temple to search vehicles.

Deputy DSI spokesman Woranan Silam called in the media to counter claims by Mr Ong-art that the DSI and police have treated the temple and its former abbot unfairly.

He said the DSI has pursued a criminal case of money-laundering and theft of property against those involved.