Murder suspect Nirandorn Kaewtaeja, handcuffed, is interrogated by Doi Lo police over the murder a 50-year-old nurse in Chiang Mai. The suspect allegedly confessed to having burned the woman alive and claims her 43-year-old husband hired him to kill her. (Photo by Cheewin Sattha)

CHIANG MAI - A man released from prison two months ago after serving a long sentence for rape and murder has been charged with the live cremation of a nurse, and has claimed her husband hired him to kill her.

Nirandorn Kaewtaeja, of Chiang Mai’s Chai Prakan district, was apprehended on Tuesday for the murder of Janjira Kerdkaew.

Janjira, 50, an advanced practice nurse at Maharaj Nakorn Chiang Mai Hospital, disappeared from her home in Chiang Mai on Dec 9 and was found on Dec 12, burned to death in a longan orchard.

Initially, Mr Nirandorn denied any involvement in the murder, police said, but after three hours of intense interrogation he confessed, Thai media reported.

He told police he had known the victim prior to the murder. The woman was driving to her home in Doi Lo district on the evening of Dec 9 and he asked her for a ride, saying he wanted to talk to her. When she stopped the car he quickly pulled her from the vehicle and strangled her until she lost consciousness.

He dragged her into the longan orchard, where he started a bonfire, using old car tyres and rubber tubes, and then threw her body into the flames.

Janjira regained consciousness and tried to flee, so he beat her with a wooden baton and pushed her back into the fire, where her body was burned beyond recognition, reports said.

While the pyre was still burning, other residents came up to see what was happening, but he said he was burning dried leaves and asked them to keep well away, Mr Nirandorn allegedly told police.

He then alleged that he had been hired by Janjira's husband, Thanapon Pareesen, 43, to murder her with the promise of being paid 100,000 baht.

However, after doing the job Mr Thanapon did not have money to pay him, he said, and gave him Janjira's car instead.  The suspect said he had the car repainted.

Police also summoned Mr Thanapon for questioning, but he denied any involvement.

Mr Thanapon had filed a complaint with police on Dec 11, saying his wife has been missing from their house in Doi Lo district since Dec 9.

Mr Nirandorn claimed Mr Thanapon was upset because his wife had found out he was romantically involved with another woman, and she often scolded him  So he hired the suspect to kill her.

Mr Thanapon had helped him pull her from the car and ordered him to set fire to her body,  the suspect alleged.

Pol Maj Gen Poonsap said investigators were not  fully convinced by Mr Nirandorn's story, and would need to investigate further.

Initially, they pressed charges of murder and concealing a body against the suspect.

A source said investigators suspected Mr Thanapon’s mistress might have colluded in the murder of his wife.

The victim had written a letter before she was murdered and asked a relative to give it to police if something happened to her.

There were reports that Janjira and Mr Thanapon had separated and reconciled several times. They recently had a major quarrel and she moved out to stay at a house in Saraphi district. Mr Thanapon had remained in the house in Doi Lo district.

Janjira had often gone there to ask her husband to repay money he had borrowed from her, and had reprimanded him over his relationship with his mistress, a young woman in her 20s.

Mr Nirandorn was previously convicted of rape and murder and sentenced to 14 years in prison, police said. He was released two months ago. 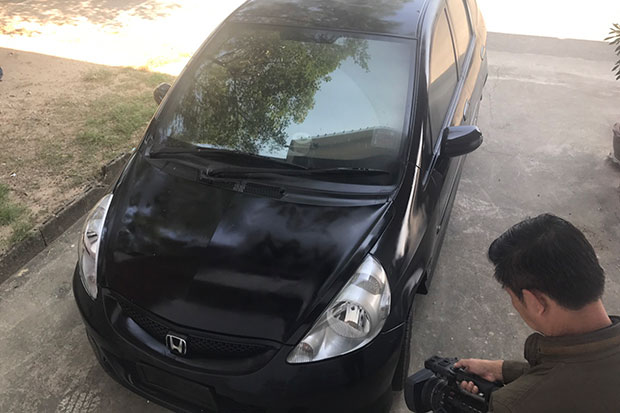 A police officer examines the car owned by the slain nurse who was burned alive at a longan orchard in Chiang Mai. (Photo by Cheewin Sattha)

RIO DE JANEIRO: Brazilian President Jair Bolsonaro has said it is a "lie" that fires are ravaging the Amazon rainforest, despite data from his own government showing the number of blazes is rising.

KANCHANABURI: The water level in the reservoir at Vajiralongkorn dam in Sangkhlaburi district remains very low, at only 42.53% of its capacity, raising fears that 2021 will be another year of water shortages, dam director Waiwit Saengpanich said on Wednesday.

New coronavirus infections reported - three returnees from Egypt, and one each from India and the US.