The new abbot of Wat Phra Dhammakaya has been officially warned to turn over sect founder Dhammakaya by Christmas Day. (Post Today photos)

Police on Sunday demanded cooperation from the abbot of Wat Phra Dhammakaya -- or anyone in charge of the temple -- to hand over former abbot Phra Dhammajayo to authorities within seven days.

The monk is wanted on charges of money-laundering and receiving stolen property in connection with the multi-billion-baht Klongchan Credit Union Cooperative embezzlement scandal, and alleged forest encroachment by the temple's meditation facilities in the provinces of Nakhon Ratchasima and Loei.

The move came two days after four warrants approved by the court for the authorities to search the temple and detain the monk from Tuesday expired without any action taken.

At Gate 7 of the temple, that faces Bang Khan-Nong Suea Road and is just opposite Klong Luang police station, several police officers handed over to temple staff a copy of the letter requesting cooperation.

The same letter also requested the temple turn over Ong-art Thamnitha, the spokesman for Dhammakaya sect disciples, to authorities. On Thursday, the Criminal Court approved a police request for a warrant to arrest Mr Ong-art on a charge of inciting public unrest in violation of Section 116 of the criminal code.

The temple abbot was warned in the letter that if Phra Dhammajayo is no longer is at the temple, it is the responsibility of the current abbot to inform police. If the former abbot still is there, however, he must be handed over to police.

If the abbot fails to respond to this request, he could be found guilty of violating Section 157 of the criminal code for dereliction of duty and Section 187 for providing assistance to or helping a suspect to hide from the authorities, the letter said.

And, by breaching Section 187, the offender may face a maximum prison sentence of two years, a maximum fine of 4,000 baht, or both.

Another copy of the same letter was seen posted near the temple gate. 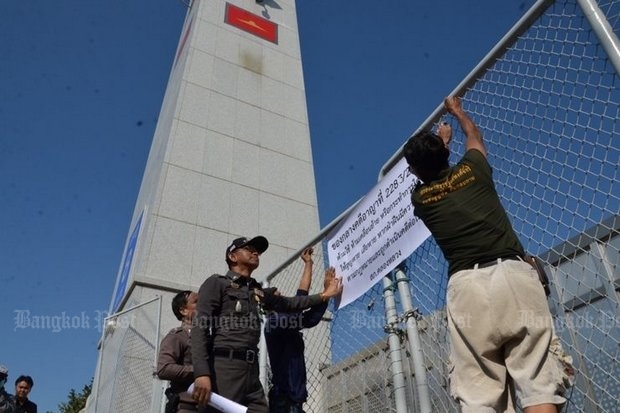 Police handed a letter requesting cooperation to temple staff, and posted a huge copy of letter at Gate 7 of the temple compound, opposite Klong Luang police station.

At Gates 5 and 6 where temple followers used to sit together praying and blocking entry to the temple, not a single person was seen there Sunday. There was no sign of praying temple followers at Gate 1 either. This was seen as an indication of tensions easing.

Tensions had built up at the temple over the past week following media reports that police planned to raid the temple and detain Phra Dhammajayo.

Meanwhile, Phra Sanitwong Wuttiwangso, the director of the temple's organisational communication office, posted on his Facebook page criticism of the police for putting up 17 vinyl banners around the temple declaring that the 3-metre high wall was built without permission.

Posted on the monk's Facebook page were some photos of novices holding a bowl standing behind a metal gate seized by police while some followers were waiting on the other side of the gate to offer alms to the novices.

The pictures were posted along with messages: "So how would these novices be able to collect alms?" and "Obstructing religious functions is illegal." The posts have sparked heated debate online.