Rescue workers take an injured foreign passenger from a tour bus after it plunged into a roadside ditch and overturned in Surat Thani's Tha Chana district on Wednesday morning. Fifteen foreigners were injured, four seriously. (Photo by Supapong Chaolan)

Three passengers were killed, including two Russians, when a passenger van careered off a wet road and into a house in Phangna province on Wednesday morning, and 15 foreigners were hurt when a tour bus crashed in Surat Thani.

The van in Phangnga was carrying 10 passengers - Russian, Indonesian and Thai nationals. It crashed into the wall of a roadside house at Bang Siad curve on the Phangna-Thap Put Road in Muang district around 8am.

Three people were killed in the crash - two Russian men and an Asian woman whose nationality was not known, reports said. The seven others were all injured.

Pol Capt Chatree Piankhayai, deputy chief investigator at Muang station said the injured and dead were trapped in the wreckage of the van. They were finally extricated by rescue workers and the injured taken to a nearby hospital.

Police said the van was travelling from Phuket to Satun. It was raining and the driver lost control on the Bang Siad curve. The van ran off the road, hit a concrete post and then ploughed into the house wall.

According to Khaosod Online, van driver Prawit was accompanied by his wife. They had collected nine foreigners from Phuket who were going to Satun on a visa run.

The driver and his wife sustained minor head injuries.(continues below) 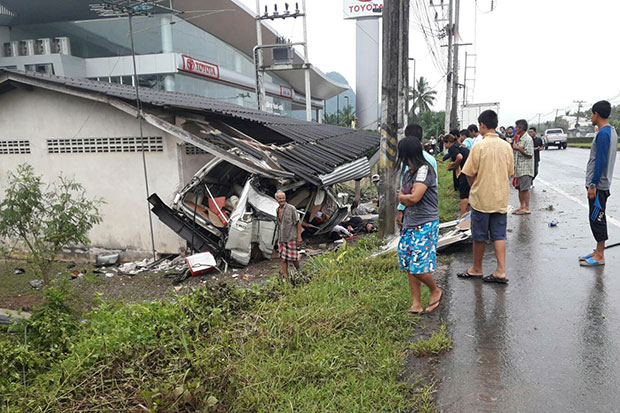 The crumpled van rests against the wall of a house after the driver lost control and it ran off the road in rain in Phangnga's Muang district on Wednesday morning, killing three passengers and injuring the seven others. (Photo taken from rescue volunteer Nonthawat Wisutthipat Facebook page)

In Surat Thani, 15 foreigners were hurt, four seriously, when a tour bus plunged into a roadside ditch and overturned in Tha Chana district about 5.30am on Wednesday.

The bus was travelling from Bangkok to Krabi. The driver lost control during heavy rain and it veered off the wet road and into the ditch at kilometre marker 118 on Asia Highway 41, said Pol Capt Pichit Khaosuwan, deputy chief investigator chief at Tha Chana police station.

The 15 foreign passengers, five men and 10 women, were trapped in the wreck and had to be helped out by rescue workers.

The 11 others sustained minor injuries and were discharged from the hospital. 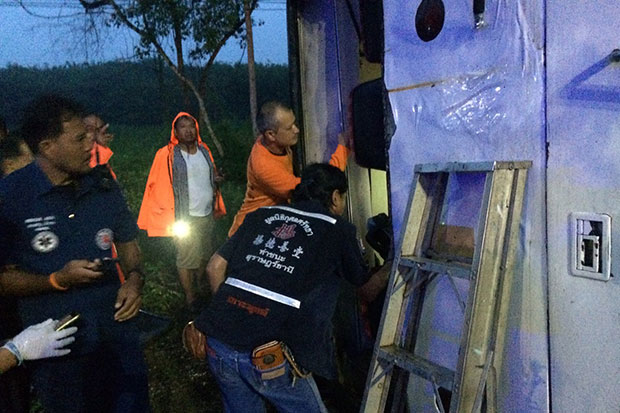