A passenger receives the cage and the body of her pet dog last Tuesday. (Photo from Facebook user Mukda Som)

Thai Airways International (THAI) has apologised and offered compensation to the owner of a dog killed just before being loaded onto a Bangkok-bound plane at Incheon airport in Seoul.

The incident involved one of three small dogs belonging to two passengers who were boarding Flight TG657 from Seoul to Bangkok on Monday, the national carrier's corporate image and communications department said on Friday. The passengers were not identified by name.

According to the THAI statement, the dogs were inside three individual cages when they were checked in by Asiana Airlines, which serves THAI passengers at Incheon. The cages were confirmed to have been securely locked and their conditions were perfect. A THAI staff member supervised the handling, it said.

The passengers were then advised to bring the cages to a special counter where the dogs and their cages were examined again, and stickers confirming the checks were attached to the cages. Staff of Asiana Airlines also attached tape to prevent any attempt to open the cages from the outside.

The cages were then handed to the staff of Korean Airport Service of Korean Air, which is responsible for the parking bay used by THAI at Incheon.

Korean Airport Service staff checked the dogs and their cages again before moving the cages to the airplane.

When the cages were placed near the rear of the plane, one of the dogs got loose and ran to the parking area. Staff of Korean Airport Service tried to catch it but to no avail.

The third step was taken because the dog ran onto a busy runway and could have jeopardised the safety of aircraft and passengers, THAI stated.

THAI informed the owners of the pets and helped them file a complaint with Incheon airport management.

THAI apologised to the passengers and said it would be responsible for standard compensation. The incident caused a 30-minute delay to the flight, it said.

Reports identified one of the owners as Mukda Wongjorn. On her Facebook page, she said the airline offered less than 10,000 baht in compensation and she had yet to overcome her grief at the loss of her pet. 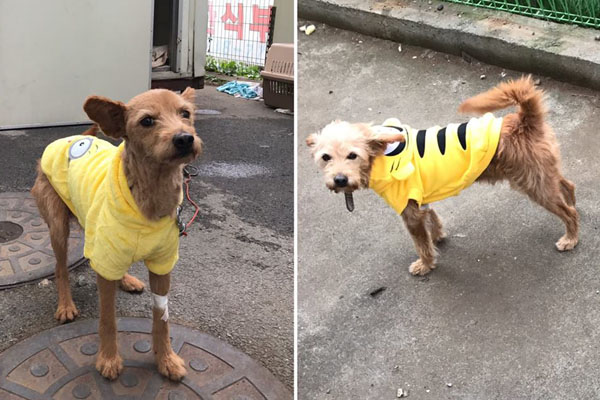 "Lion", the late pet of Mukda Wongjorn, was shot after straying onto a runway in Incheon. (Photo from Facebook user "Mukda Som")