A 0.7-metre reflecting telescope in the inset is aimed at detecting and tracking asteroids and comets passing close to Earth in the hope of reducing any potential hazards they could pose, as well as providing the public with the most up-to-date and accurate information on these celestial objects. National Astronomical Research Institute of Thailand (Public Organization) 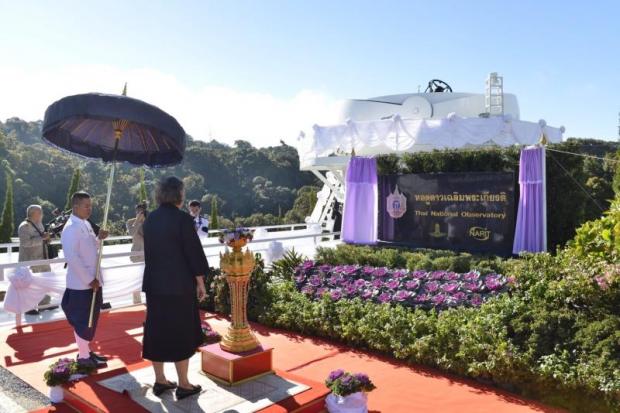 The facility, which houses a 0.7-metre reflecting telescope, is aimed at detecting and tracking asteroids and comets passing close to the Earth in the hope of reducing any potential hazards they could pose, as well as providing the public with the most up-to-date and accurate information on these celestial objects. The observatory was built under the auspices of a Nasa's Near-Earth Object Observations programme.

Narit supplied the telescope, the RTAF provided the location while the Digital Economy and Society Ministry provided the internet networks and held training sessions for personnel. Apart from the newly unveiled facility, Narit already has another observatory with a 2.4-metre reflecting telescope located at TOT Plc's repeater station in Doi Inthanon national park, which plays a significant role in supporting advanced research and international collaboration on astronomy.

Narit also collaborated with the Minor Planet Centre which deals with astrometric observations and orbits of asteroids and comets under the auspices of the International Astronomical Union, as well as the Japan Spaceguard Association.

Meanwhile, Prime Minister Prayut Chan-o-cha will seek an audience with His Majesty the King to invite him to preside over a ceremony to open an exhibition in honour of the late King Bhumibol Adulyadej on Dec 30 at Sanam Luang, according to Prime Minister's Office Minister Ormsin Chivapruck.

The exhibition, which will feature the work and royal projects initiated by the late King as well as the work of His Majesty King Rama X, is intended for people who are waiting to pay their respects to the late King. Mr Ormsin said the centre also discussed activities which will be held from now until the New Year.

One of the highlights is a Buddhist chanting session at Sanam Luang on Dec 31 to ring in the New Year.

The prayer session is intended to pay homage to the late King Bhumibol and to extend best wishes to His Majesty King Rama X, Mr Ormsin said.