SUNGAI KOLOK, Narathiwat - For passengers on the 12:33 train from Songkhla's Hat Yai to Sungai Kolok, god and good luck are touchstones for survival. 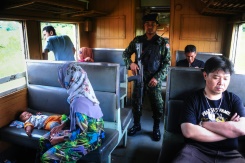 Despite heavy security, the Hat Yai to Sungai Kolok train line in Thailand has been bombed three times this year by insurgents  demanding eventual independence

The railway line through the insurgency-riddled far South has so far been blown up three times this year by Malay-Muslim separatist rebels.

They are determined to show the writ of the Thai state does not run unchallenged through their region, spreading fear and insecurity through near-daily assassinations, ambushes and bombings.

"I'm scared... nobody knows what will happen on this train," 70-year-old Ka-Yoh told AFP.

"We have no other way to travel. So for me, it's better to eat, sleep and if I wake up at my station I will be happy... it's in god's hands (inshallah)," she added, plucking a piece  of raw green mango from a packet.

The last bomb blast, on Sept 3, tore through the rear carriage, killing a train official and wounding two others.

The line passes through Pattani, Yala and Narathiwat provinces, the main territories of the Muslim-majority South, an area colonised by Thailand over a century ago.

Around 6,800 people have been killed in almost 13-years since the insurgency resurfaced in the region, which has a distinct local Malay-Muslim culture in a predominantly Buddhist Thailand.

The majority of the dead were civilians, yet the sticky, complicated conflict is far from international headlines.

A new round of peace talks were held last week in secret, reviving discussion on carving out civilian-friendly ‘safety zones’. But an end to the fighting remains distant.

The train bustles through a lush landscape of mountains and rubber plantations, broken up by flashes of bright pink and sky blue from the abayas of young Muslim girls.

For passengers, the 35 baht journey to the Malaysian border is the cheapest way through a dangerous area.

But for the rebels, who tag themselves 'juwae' or freedom fighters, it represents an easy target -- a symbolic artery of the Buddhist Thai state.

For that reason Thai authorities are determined to keep the trains running.

"The attacks are a problem... that's why we're here," a volunteer soldier who has worked the line for several years told AFP, his rifle propped up on a carriage bench.

"But we can't stop the bombs," he added, requesting anonymity.

A militant cell buried charges and gas tanks deep under the tracks overnight, then they lay in wait.

As the train passed at dusk the next day, they detonated the bomb.

"By attacking trains they bring suffering to ordinary people," said Col Pramote Prom-In, a spokesman for Thailand's army in the south.

Rail authorities say the exact number of attacks since the insurgency erupted in 2004 is "classified", but media reports say it has been hit dozens of times.

"The militants try every way they can to destroy symbols of the state, the economy as well as the credibility of the government," Col Pramote added.

In the past, they had overwhelmingly kept their fight to the far South, affording most Thais a comfortable distance from the conflict. But in August the violence appeared to spill out.

Four Thais were killed by a series of small coordinated explosions in resort towns including the island of Phuket and in Hua Hin in Prachup Khiri Khan province, south of Bangkok.

True to form the rebels did not claim the attacks and Thai authorities have desperately downplayed any link with the insurgency. But the bombs carried the rebels' hallmarks and the named suspects all hail from the region.

For now, locals in the Muslim South remain at the hard edge of the conflict, sandwiched between Thai security forces who smother the region and rebels who live amongst them -- and are ruthless in their treatment of perceived collaborators.

Yet support for "the movement", as the rebellion is known, remains strong.

The Malay-Muslim population "may not agree with the brutality of the insurgents... but they share the same sentiment, the historical mistrust of the Thai state," explained Thailand-based security analyst Don Pathan.

Few believe peace is near despite endless rounds of talks.

Many remain unconvinced the government's opposing negotiation partner, an umbrella group dubbed the Mara Patani, can tug the leash of the rebel footsoldiers.

Meanwhile, the armed insurgents, dominated by the publicity-averse Barisan Revolusi Nasional (BRN), do not believe the Thai junta will offer anything worth laying down their guns for. They are yet to endorse the current talks.

The rebels want serious discussion of devolution of power as a step towards independence, amnesty for their members and the involvement of international observers to shape a rebooted peace process.

Until they buy-in, the conflict is destined to grind on.

"I don't see any way out of the violence until one side takes a huge leap of faith that is pretty quickly reciprocated by the other," Mr Pathan added.