Passengers are on board the Royal 1 ferry for the first service between Pattaya and Hua Hin, which did not leave the Bali Hai pier. (Photo by Chaiyot Pupattanapong)

The much-publicised ferry service between Pattaya and Hua Hin could not make a debut on Sunday after the Marine Department and the operator decided to call it off for the safety of passengers.

More than 200 passengers were on board the Royal 1 catamaran at Laem Bali Hai pier in Pattaya for the first service across the Gulf of Thailand to Hua Hin district in Prachuap Khiri Khan. Some of them showed up at 5am to make sure they got tickets for the voyage.

The ferry, operated by Royal Passenger Liner Co, was scheduled to leave Pattaya for Hua Hin at 8.30am for a 105km trip which takes less than two hours, compared to more than four hours by car.

But all were disappointed after the department made the announcement to all passengers that the trip had to be cancelled due to strong winds and high waves of up to 4m en route to the destination.

Royal Passenger Liner said in a statement that the first service to Hua Hin was postponed to Thursday. In the meantime, it is offering free trips from Laem Bali Hai to around Koh Lan until Wednesday for passengers who want to board the ship.

Aekarat Khantharo, director of the marine office in Pattaya, said the cancellation was for the safety of passengers after the Meteorological Department had warned his office of unfriendly weather conditions including rough seas in the upper part of the gulf.

The double decker can withstand waves up to only two metres but the weather forecast showed it could encounter waves twice as high along the way. (continued below) 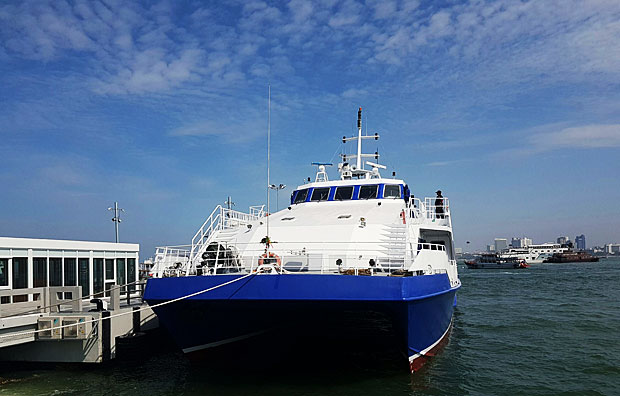 The Royal 1 is seen at Laem Bali Hai pier in Pattaya. (Photo by Chaiyot Pupattanapong)

Preecha Tantipura, chief executive of Royal Passenger Liner, said safety came first for the service and asked the passengers to use their tickets for the Monday schedule.

The firm offers free rides as a New Year's gift between the two destinations until Jan 15, after which the normal fare of 1,250 baht will apply. The service is on a trial basis until Jan 12, when it will be officially launched.

The latest weather warning issued by the Meteorological Department on Sunday forecast strong winds and high waves in the gulf until Monday in Prachuap Khiri Khan and until Wednesday for southern coastal provinces.

Passengers are advised to check the weather with the operator for the service schedule, Mr Preecha said. (continued below) 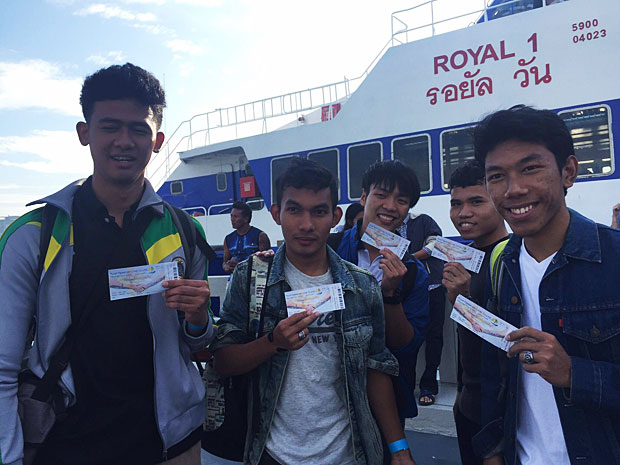 Passengers show their tickets for a free ride from Pattaya to Hua Hin. (Chaiyot Pupattanapong)

The cancellation spoiled the New Year vacation of some passengers, one of them Pichit Charoennusorn.

He and his friends planned to count down to the new year in Pattaya and to cross the gulf on the free ride to enjoy the rest of the long holidays in Hua Hin.