Croc-bitten woman to recover in Bangkok

Muriel Benetulier (right) talks to her husband at Chaopraya Abhaiphubejhr Hospital in Prachin Buri before a transfer to Bangkok on Monday. (Photo by Manit Sanubbun)

The French woman attacked by a crocodile in the Khao Yai National Park is being transferred from Prachin Buri to Bangkok and the park chief said the animal had yet to be caught.

The transfer was made on the request of Muriel Benetulier, 48, and her husband because the Chaopraya Abhaiphubejhr Hospital in Prachin Buri could not provide an interpreter for the couple, Wichai Pornleesangsuwan, director of the Protected Area Regional Office 1’s national parks unit, said on Monday.

Mrs Benetulier, who suffered a severe bite wound on the leg, wanted to be moved to Bangkok International Hospital.

According to Khao Yai park rangers, the attack occurred on Sunday afternoon when Mrs Benetulier and her husband spotted a crocodile about two metres long lying in the sun near a canal known as Huay Lamtakong, about 10 metres outside the Orchid Cliff-Haew Suwat Waterfall nature study trail.

The couple went outside the marked tracks as Mrs Benetulier wanted to be photographed with the crocodile, although there were signs in English urging hikers to keep to the nature trail and watch out for the reptile. (continued below) 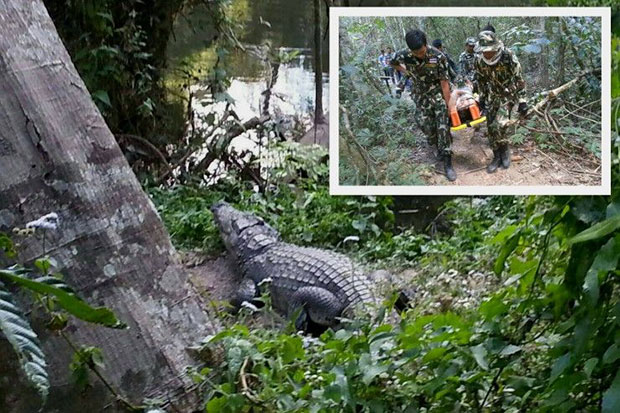 The crocodile which bit a French woman is shown in this undated photo. (Photo by Khao Yai National Park)

Posing for the photo, Mrs Benetulier squatted near the crocodile and had her husband take a shot. But as she was getting up, she tripped and woke up the crocodile. The animal charged and snapped at her, leaving a wound about 10 inches long and 5cm deep near her right knee.

Park chief Kanchit Srinoppawan said the crocodile was believed to have been released without park officials’ knowledge around 2008-09 during the tenure of Manoj Karnpanakngarn. An examination conducted by veterinarians of Sriracha Crocodile Farm confirmed the croc was not the endangered freshwater Siamese crocodile born in the wild.

Mr Kanchit said when he came to his office in 2014 the reptile already lived in a canal called Wang Jorakae (Crocodile’s Palace) about 1km further north from Haew Suwat waterfall and it never left the area.

“It’s never attacked anyone before. The incident took place because of a breach of regulations. There are clear signs in the area and officials conduct routine patrols in isolated parts [of the nature trails],” Mr Kanchit said.

“Authorities have tried to capture it several times but failed. There are large logs and pieces of wood in the canal which the croc’s used for camouflage. The water is also deep.”

Thanya Netithammakul, head of the National Park Department earlier warned visitors to strictly comply with the park’s rules and refrain from taking photos or selfies with wild animals as doing so would put them at risk.