Families grieve for those lost in deadly smash
Thailand
General

Families grieve for those lost in deadly smash

Friends of Prompot Kosirivalanon, a second-year medical student at Chulalongkorn University who was killed in the van-pickup crash in Chon Buri on Monday, weep at the Institute of Forensic Medicine, where they reclaimed his body Tuesday. (Photo by Patipat Janthong)

It was the hardest moment of Sasinan Sitthibut's life Tuesday when she was forced to identify the corpse of her son, a day after she gave him what she had never expected -- her last hug.

Her son, Prompot Kosirivalanon, a 20-year-old student at Chulalongkorn University's Faculty of Medicine, was among the 25 victims killed in a crash on a highway in Chon Buri's Ban Bung district on Monday.

Earlier that day Ms Sasinan asked her son to stay home a little longer, in their hometown of Chanthaburi, rather than return to Bangkok so soon into the holiday break; but he insisted on returning to prepare for an exam.

Recalling his wish to study adds to his family's grief, they say, as it reminds them of his hard-working nature; his friends say he was thoughtful and good-humoured.

Ms Sasinan hugged her son and said goodbye to him at a passenger van stop in Chanthaburi's Muang district.

Hours later the van, packed with 15 people, veered out of its lane and smashed into a pickup truck carrying 12 people on its way to Rayong.

The van caught fire and exploded.

The tragedy is a reminder of how treacherous the roads are around the New Year holidays, a busy time when people go home to their provinces and when cases of speeding and drink driving surge. 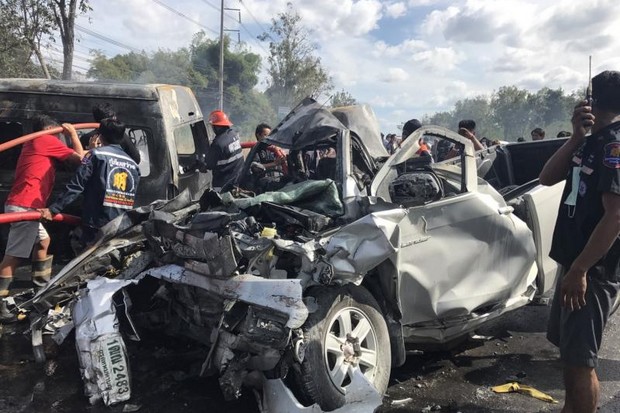 In a moment, 25 lives were snuffed out on a Chon Buri highway - but hundreds of other lives were affected and ruined.

Monday's tragedy was also a blow to the government and its seven-day road safety campaign launched on Dec 29, which has so far failed to curb casualties over the holidays. Instead the number of accidents, deaths and injuries have increased.

Monday's loss of 25 lives included a prospective doctor, a graduate in computer science, a promising molecular genetics expert, a car dealer and a small boy.

Another victim, Honda car dealer Hathaithip Modpai, was on her way back to Bangkok after visiting her family in Chanthaburi. "I feel really sad and don't want to return to Bangkok," she wrote on social media before the fatal crash.

Hathaithip's parents said Tuesday they could not yet accept the truth.

"We made merit together but she stayed with us for just a few days before she left," said her 66-year-old mother, Wimon.

Kantinan Thaitrong was a 23-year-old recent graduate from King Mongkut's Institute of Technology Ladkrabang, poised to begin a career as an IT worker for a commercial bank. In a long online message on social media, Katinan's girlfriend emotionally recalled the last moments spent together.

"I just want to tell you I love you, but it comes at a time when you're gone," she said.

Other victims included Prakasit Ratanatanyong, who specialised in the molecular study of cancer and human diseases, and a boy who was killed along with two family members in the pickup truck.