A man climbs on a bamboo ladder to enter his flooded house through a second-floor window in Narathiwat on Thursday. (Photo by Waedao Harai)

As of Thursday morning, the Phetkasem and Asian highways running through the province were still under water and not passable to small vehicles.

An afternoon report said Asian Highway 41 was also cut by floodwater between Surat Thani and Chumphon, but there were detours available.

Somjit Songchudam, a 59-year-old villager of Moo 7 village in tambon Don Sai of Khuan Khanun district, reportedly drowned after falling into a canal and swept away by a strong current.

A 300-metre section of the railway track running through the province, submerged by high water, had been damaged.

In Yala province, water in the Sai Buri River which runs through six tambons of Raman district had receded to normal in many areas.  Riverside communities, however, were still inundated.

Ten schools in Raman district remained closed because roads to them were still flooded.

In Trang, runoff from the Banthat mountain range, which had flooded many localities in Nayong and Muang district for the past three days, had flowed into Trang Municipality from the East and inundated Kaphang Surin, Phraya Rassadanuprasit Monument, Khuan Khan, Khuan Khanun and sports stadium communities, reports said.

Municipality officials had erected tents to accommodate people who had been evacuated from their flooded communities.

Traffic in the Trang provincial town was slow and congested.

Rail services to the south were halted on Wednesday, with trains parked in Nakhon Si Thammarat. The tracks remain flooded. 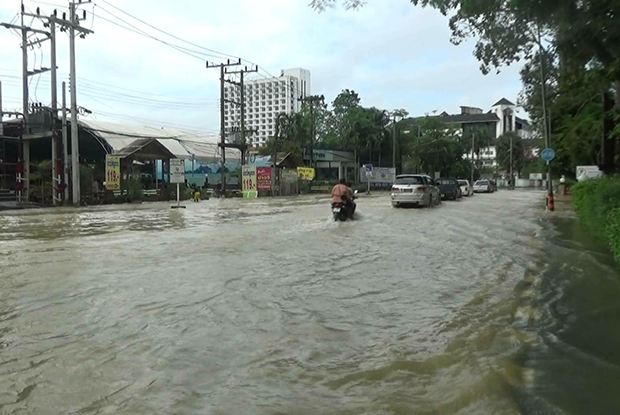 In Nakhon Si Thammarat, runoff from the Banthat mountain had caused flash floods in many areas, particulalrly Thung Song district.  The water level in the Thung Song district town was about 2 metres high, prompting residents to evacuate to high grounds.

Paiboon Nakthippiman, chief of Chulabhorn district, said six tambons of the district were flooded, affecting 9,800 families.  The flood at some spots was about 3 metres deep, putting many houses completely under water.  A power blackout had hit many localities.

Ron Phibun district of Nakhon Si Thammarat was also hard hit.  Six tambons with 15,000 households had been affected by about 1.5 metres deep floodwater.

In Narathiwat, floodwater from Rangae district had flowed to tambons Lamphu and Khok Takhian in Muang district.  Water from Yakang canal had overflowed and was 2 metres deep in many localities. 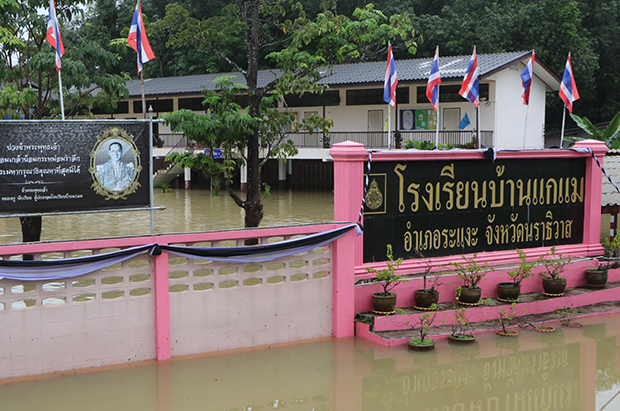 Air force officers brave raging floodwaters to rescue three people in Tha Chana district of Surat Thani as their house starts to crumble under the force of the current. (Video from the Royal Thai Air Force)