The tourist van was carrying 14 nurses and officials from a hospital in Samut Prakan to the popular tourist mountain when the fire broke out in the front of the vehicle at 4.30pm as it approached a viewpoint.

The driver, whose name was not given, said he had noticed the van's engine was overheating as it travelled uphill. On seeing smoke from the front, he immediately stopped the vehicle and warned all his passengers to flee.

Firefighters took about half an hour to put out the flames that engulfed the vehicle, and the shaken group of tourists cancelled their plan to reach the top of the mountain.

Concerns over passenger van safety have escalated following recent incidents that included a van-pickup collision in Chon Buri in which 25 people died. Authorities this week announced a plan to replace 6,400 vans serving the provinces from Bangkok with microbuses by the end of this year. 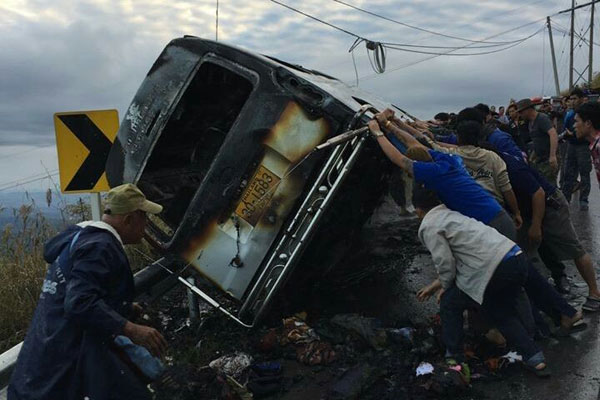 Rescue workers inspect the charred tourist van on the road to Phu Thap Boek in Phetchabun on Friday evening. (Photo by Soonthorn Khongwarakhom)