Crocs on loose from flood-hit zoo

Floodwaters have inundated the Tha Lad Zoo in the compound of Somdet Phra Srinagarindra 84 Public Park in Muang district of Nakhon Si Thammarat, resulting in the escape of 10 crocodiles on Saturday. (Photo by Nujaree Raekrun)

NAKHON SI THAMMARAT: At least 10 crocodiles were on the loose from an open zoo on Saturday after floodwater inundated a huge public park in this southern province.

Muang district municipal officials, who oversee the Tha Lad Zoo, on Saturday warned residents living around Somdet Phra Srinagarindra 84 Public Park, which houses the zoo, to take extra caution for fear the reptiles might be hungry and attack people. 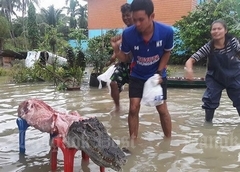 At least one of the escaped crocodiles was shot and quickly butchered with the meat distributed to neighbours. (Photo by Nujaree Raekrun)

The 14-rai zoo houses more than 10 crocodiles, some measuring up to five metres each, rare bird species and other animals. It is part of the public park, which covers 1,257 rai.

Municipal staff were racing against time to evacuate animals from the flood-hit zoo as unseasonal storms continued to lash southern Thailand and northern Malaysia. At least 18 storm-related deaths have been reported in Thailand alone.

The municipality asked electricity officials to cut off power at the public park as the water level increased.

Deputy mayor Manas Pongyeelar confirmed that all the crocodiles were missing from the zoo. Municipal workers in boats were patrolling the park in hopes of locating the animals and keeping them away from populated areas, but the task was complicated by rising water levels.

There were reports that local residents shot dead two other crocs on the loose from a private farm in Muang district two days ago during the flooding. The animals were each 3-4 metres long. 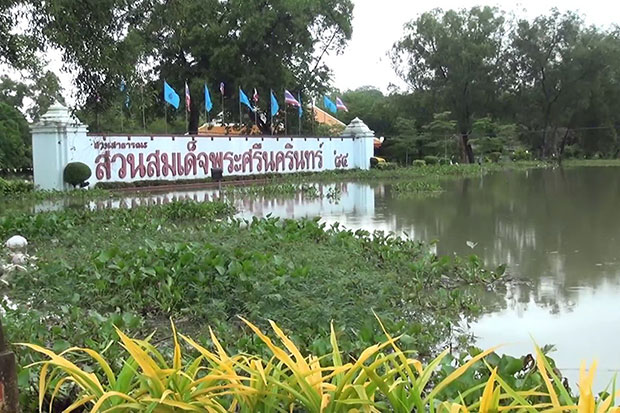 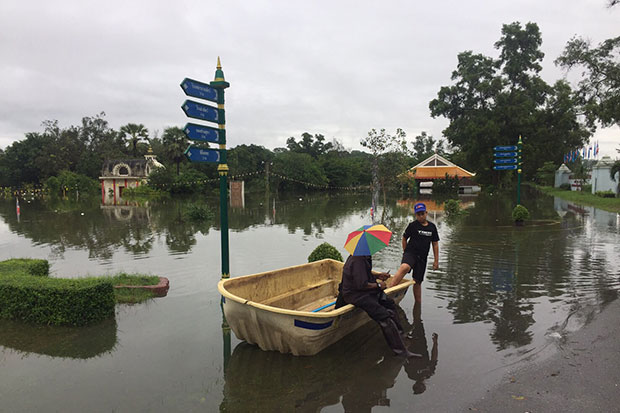 Municipal workers use a boat inside the flood-hit public park to evacuate animals from the zoo. (Photo by Nujaree Raekrun)