Temple of Dawn offers a beacon of hope
Thailand
General

Temple of Dawn offers a beacon of hope

To many, an education and a better future are a privilege and a luxury, although exception do arise such as in the case of the learning centre in active operation under the roof of the iconic Wat Arun in the old Bangkok quarters.

There, Indonesian businessman Hartanto Gunawan has spent four years as a monk, which has changed not only his future but also that of about 200 girls and young women who have benefited from his educational initiatives that blend Buddhist principles in the training of professional and life skills.

The students have found a rare opportunity to acquire skills needed for professional and worldly pursuits at the temple in Wat Arun Rajvararam (Temple of Dawn) Community Learning Centre (CLC).

"It's quite boring at times. Sometimes I dozed off during the meditation class," said Darunee Puanglabutr, 24.

"I didn't quite like it. But as I sat with friends and the Father, it gradually calmed my wandering mind."

It offers meditation classes, but they are not its principal purpose. 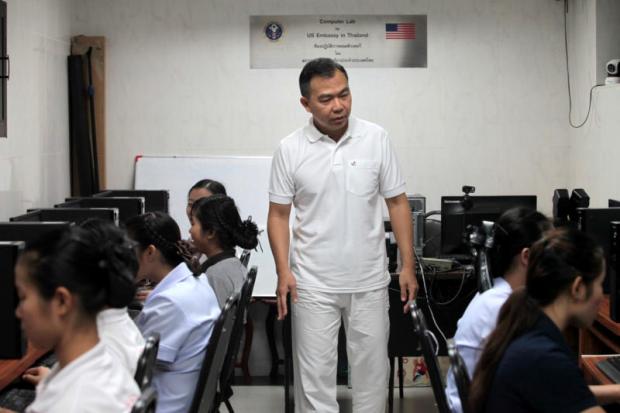 The CLC provides a beacon of hope for many underprivileged girls who feel deprived of a promising future.

Each year, the centre hands out one-year scholarships as assistant nurses to 25 young people who are orphans or from broken homes and poor. Among them are needy youths and children vulnerable to human trafficking or domestic violence.

The centre has also introduced state-certified study courses for young people to learn some basic skills like computer work, English, Thai traditional dance, food and soap carving during the weekends.

The course runs between 50 and 60 hours and graduates receive a certificate in March every year. The centre has been supplied with a list of needy girls by the Ministry of Education. This year the Ministry of Social Development will also send a similar list to the centre. 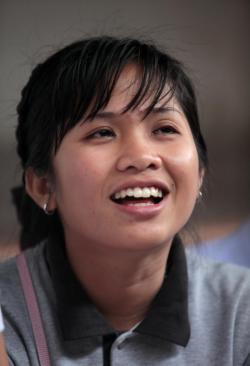 Ms Darunee said she could not imagine what her future would be if her school teacher had not referred her to Wat Arun's CLC.

"When I was in Mathayom 4, my parents said they couldn't afford to send me to school anymore. But my teacher helped me get through to the final year of secondary.

"She said there was a place that could help me get educated and it was here," said Ms Darunee, who is from a boat-dwelling family in Samut Sakhon.

She enrolled in the ninth batch of students at the centre three years ago. After a one-year assistant nursing course at Siam University in collaboration with Thonburi Hospital, she has been working as a nurse at Thonburi 1 Hospital for two years.

In March, she will head to New York for a bachelor's degree programme in nursing, thanks to a scholarship from one of the centre's donors.

"I will study hard because the donors are supporting me and I will come back to help the centre here and my family too," said Ms Darunee, a top scorer in her class.

After meeting other girls at the centre, it dawned on her how many were struggling because of hardship. Some were abused or were orphans. The centre has helped them to find their feet again, with renewed confidence and independence.

"The cherished Buddhist philosophy of attaining wisdom through decent conduct and staying focused keeps us away from illusions and cheating.

"Father [Mr Hartanto] doesn't solve all our problems for us, but guides us to a solution. We need to think on our own but if we feel helpless, he is there for us to consult and seek advice." 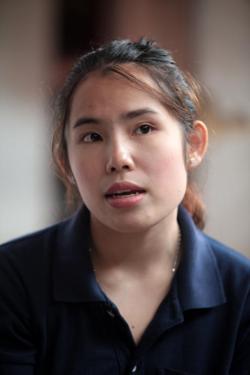 Oracha: 'Education is the guiding light'

Ms Darunee is counting her blessings that she did not end up working in a factory thanks to the education she has gained.

"Now I earn some respect from decent work," she said.

Mr Hartanto said the centre owes a great deal to the financial support of US-based JWS 60 Foundation and Virginia B Toulmin Foundation.

The cost of running the centre, providing free scholarships, accommodation, meals and other necessities comes to around US$150,000 (about 5.2 million baht) a year. The students do not have to return or reimburse a single baht upon their graduation and gaining employment.

"We are truly in a position to help them to get a better life, better future and better jobs without expecting anything in return," Mr Hartanto said.

The centre's primary mission is to prevent young women from becoming victims of trafficking or domestic abuse or violence. Then it provides them with free scholarships in order to prepare them for employment.

The centre also seeks to open up their minds and help with their learning so they can integrate more comfortably into society with an assured sense of security, the CLC founder said.

In the first four years of its establishment, the centre admitted boys who are now working at Siemens and Hitachi. But Mr Hartanto said girls were more disciplined.

Apart from the American philanthropists, some attendants of the meditation class offered at the centre who come from places such as Taiwan, Germany, Cyprus and Australia also make donations.

Sutida Thongbutr, 21, from Roi Et, also a top scorer in her nursing class, said many people have helped care for her and her sister. Their father was financially strapped as he has five children, from another marriage. 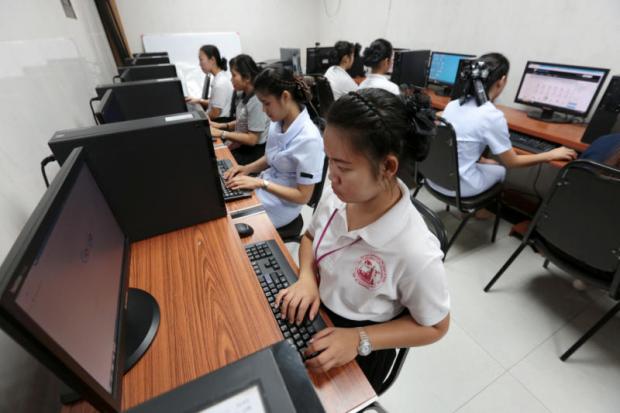 "Sometimes I feel sad about why [my parents] can't support my education. They have other mouths to feed. So with the opportunity the centre extends to me, I can have a new life," said Ms Sutida.

Prisana Jabalong, 19, from Nong Khai, is in the latest group of students the centre has enrolled. She said she did not work hard enough when she was younger so she did not pass the nursing examination after finishing secondary school. Now she can study with the financial aid of the centre and re-sit the exam.

"If I could make one wish, that would be to see Thai society attach more importance to educating children.

"More scholarships are of paramount importance for the needy who want to follow their dreams," said Ms Prisana, who hopes to return home in the next few years after she has built up enough savings.

Oracha Salawinponpana, 20, an ethnic Karen from Tak's Tha Song Yang district, said the centre has granted her a scholarship which helps ease her family's financial burden. Her family has to pay for tuition fees for two brothers.

"I have been home only twice since I came here, when my mother died in April last year and for the 100 days after her death," said Ms Oracha. 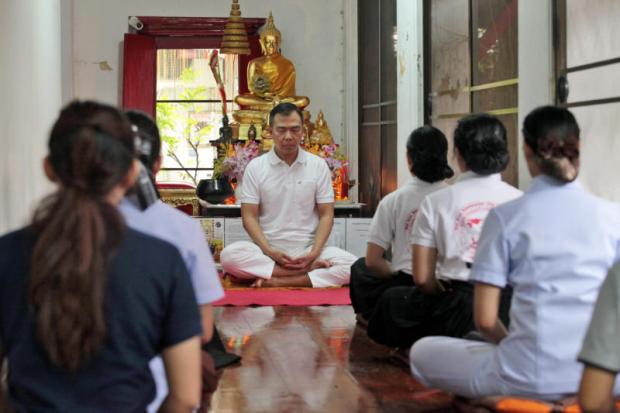 Education, she said, was her guiding light. "I want people and the government to help support us," said the Karen girl who has been working as a nurse for a year.

Wat Arun is close to Mr Hartanto's heart. Apart from assistance the centre has received, the temple is where the former businessman has been ordained for two years.

Before that, Mr Hartanto led the life of a forest monk for two years in Sakhon Nakhon. He later moved to Bangkok.

His family was impressed to see him entering the monkhood and surprised to see him becoming more Thai and a permanent resident here.

"In a Mahayana Buddhist family, a son is expected to be ordained. I decided to change into the saffron robes out of boredom with everyday life. I used to work as a manager and CEO for several enterprises in my country," said Mr Hartanto, the third of seven children who have emigrated or gone to live in the US, Japan, and Indonesia.

He said he would like to repay the kindness of the Thais when he was a monk. And he hoped one day he could become naturalised as a Thai. 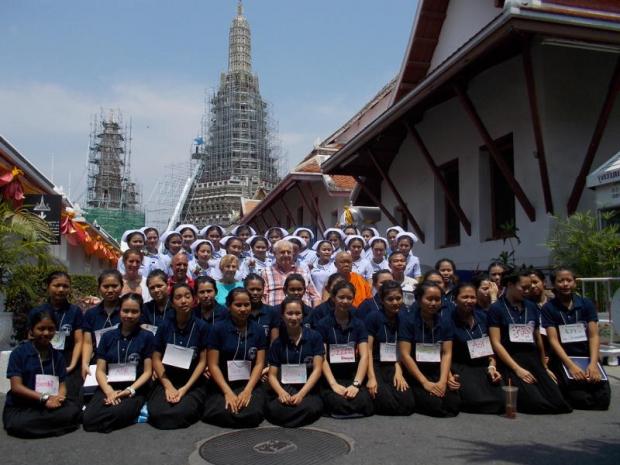 He explained the centre recognises the true meaning of the three colours on the Thai flag, representing the nation, religion and the monarchy.

"Also, we are trying to preserve the old Thai tradition where the temple is the place to learn, to consult and to take refuge. Nowadays, malls, karaoke, internet cafes, bars have diverted the younger generation's attention away from temples," he said.

Back in May of last year, Unesco Bangkok director Gwang-Jo Kim highlighted the importance of learning centres during his opening remarks at the Changwon/Unesco Regional Education Conference 2016, "Exploring The New Paradigm of Community Learning Centres through Online Life-long Learning", held in Phuket.

"Community learning centres are essential to achieving the Sustainable Development Goal 4 -- equitable and quality lifelong learning for all -- as they offer learning that is flexible and responsive to the needs of all learners. And, in this case, offer educational opportunities where few may previously have existed," he said.