The demand for organically grown food in Thailand has sparked a major resurgence in natural farming methods, especially in the past couple of years, and it has even spilled over to the export sector given the country's reputation as a major "bread basket" of Asia.

While being welcomed by many health-conscious consumers, there is little evidence that the increasing popularity of organic agriculture is helping to reduce the excessive use of pesticides, which continue to put at risk not only the environment but also the health of the people in every step of food production.

In 2014, agricultural chemical imports soared over 70% to 22 billion baht compared to the previous year.

The number of active ingredients and combinations in imported pesticides increased from 210 to 253. Herbicides were by far the most significant of the imported pesticides, accounting for 80% of the total volume, followed by insecticides at 9% and fungicides at 8%.

Health authorities have done blood tests on four million farmers throughout the country, and they remain a concern. 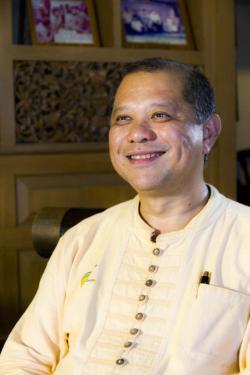 It has also been reported that almost 1,800 people a year die as a result of prolonged exposure to pesticides, which cause numerous immediate side effects such as nausea and headache. Says Kitti Thitskul, project manager of Chiang Rai Food Safety, it's not just farmers who are at risk but consumers as well because vegetables and fruits that reach the markets are contaminated.

Figures on pesticide use were obtained from a survey conducted by the Chiang Rai project in collaboration with those involved, including local authorities and farmers.

In most developing countries, including Thailand, farmland for growing certified organic produce accounts for less than 0.5% of all agricultural land.

A major reason preventing organic farming from being practised more widely is that the transition to organic farm management is difficult for farmers without financial aid, especially those with large properties or working with degraded environments. As well, after conversion is complete, organic agriculture practices tend to achieve lower yields than those that involve high use of chemical substances. It also might take years to restore the ecosystem to the point where organic production is economically viable, according to experts.

However, efforts are being made to adopt modern organic management to improve their productivity and food safety throughout the food chain.

Citing the need for sustainability of organic agriculture and food safety, local business entrepreneurs teamed up with local communities and authorities to form the Chiang Rai Green Network in a bid to not only initiate a cycle of organic agriculture management, food safety, fund flow, environment, social business and economic movement, but also drive sustainable tourism.

Tourism is a major income earner for the province which cannot be overlooked, according to Mr Kitti.

"Sustainability of food safety and food security will continue to be in trouble and the health of Thai people remains at risk as long as most of the country's agriculture is heavily reliant on the use of chemicals and pesticides in the production process," he said.

Mr Kitti, who is also president of the Association of Northern Tourism Federation, said the four tenets of the Chiang Rai Green Network are to serve the green community, provide green services, protect green health, and promotion (green plus). 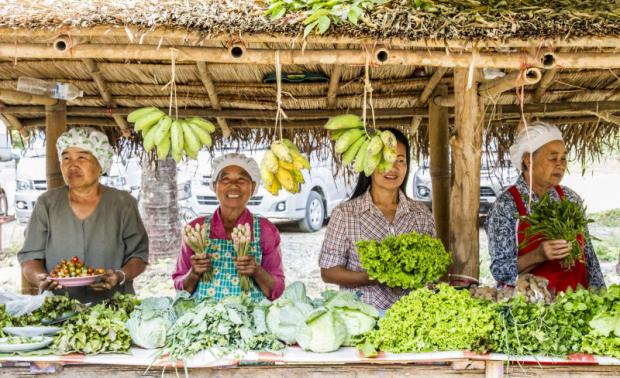 Green community consists of agricultural farmers supplying pesticide-safe, environmentally friendly and organic vegetables, dairy and meat to restaurants and hotels which are registered with the green service network.

Green service comprises a network of restaurants and hotels that promote food safety from farm to table by acquiring organic products from a network of community-supported agriculture suppliers for customers and tourists.

Green health is a network of tourists and individual consumers who signed up to support safe and healthy food. They also help monitor food quality and directly support the Chiang Rai Green Network throughout the food chain.

Green plus, on the other hand, comes in the form of a fund to help finance public awareness campaigns about food safety consumption, promotion and inspection. 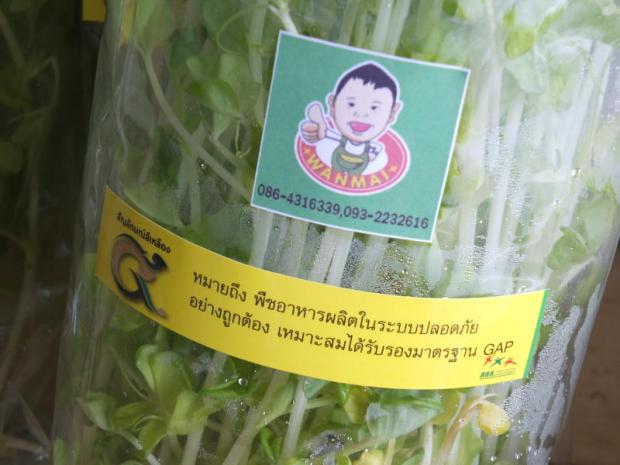 Collaboration between private and public sectors and local communities that spur producers, consumers and service providers to realise the importance of organic products is unique and makes Chiang Rai the first province to spearhead such a model.

So far there are 25 communities in Chiang Rai and 91 restaurants which have joined the project, which has also attracted membership applications from 10,754 consumers.

Mr Kitti said the goal of the project is to expand to cover all 18 districts of Chiang Rai within three years to make farming safe and healthy.

Restaurants can also use locally harvested organic products. This project can be extended and integrated with other social and commercial entities, such as tourism network communities supporting organic agriculture in every province, he added.

"As the climate is changing, the approach to producing and consuming food and farm products must too," said Jongjin Kim, deputy regional representative for the Food and Agriculture Organisation, based at the United Nations Regional Office for Asia and the Pacific.

He said the future of farming lies in sustainable agricultural management that works with nature and in close contact among multiple stakeholders. 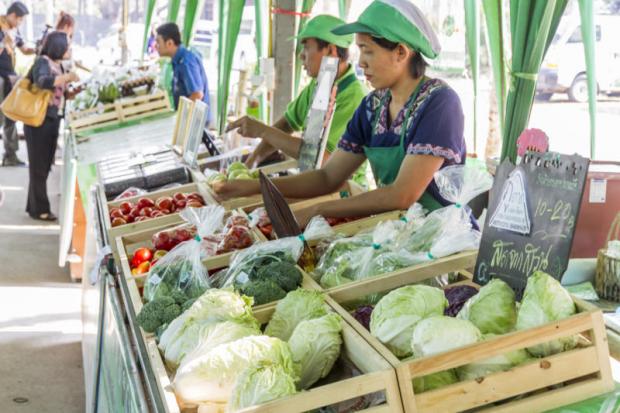 One sector or stakeholder alone cannot solve the complex issue of food safety, Mr Kim said. All parties, from the government to the civil sector, private businesses and academia have to work together to continue the efforts to recognise the economic and social significance of food safety and land management.

Mr Kim said the effort must be sustained so that it can contribute to economic growth, biodiversity, sustainable agriculture and food safety, as well as the implementation of constructive projects advised by King Bhumibol Adulyadej, who was a renowned champion of sustainable agricultural development. 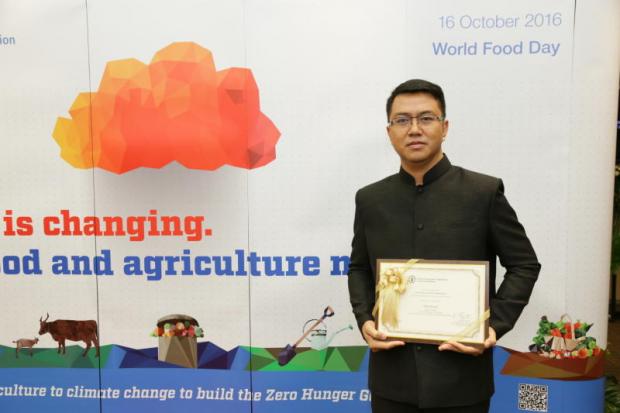 Dilok Pinyosee, an 'outstanding farmer' with his plaque on World Food Day 2016. FAO

It is said that organic produce which heightens food safety is farmed at the mercy of Mother Nature, since chemicals and pesticides are excluded from the equation.

To heal nature, bruised and battered from the overuse of chemicals, a band of new generation farmers has set out with a vision to adopt new technology to help reduce gas emissions that are causing global climate change.

Award-winning sugarcane farmer Dilok Pinyosee, 38, is among the ranks of young farmers who have set a clear vision to reduce factors that perpetuate climate change.

The former engineer believes farmers can arm themselves with the technology to cut down on gas emissions.

After harvest season, haze blankets many parts of the country as farmers, particularly in the North and Northeast, burn their fields to kill weeds in preparation for the next crop and in the hope of collecting wild food sprouting up from the burned ground.

Prior to sugarcane farming, Mr Dilok studied metallurgy and holds a master's degree in information technology. After three years of city life in the rat-race working environment, the former computer programmer was called back by his father, who is blind, to help take over the sugarcane farm.

His family's sugarcane farm had expanded significantly while Mr Dilok was away in the city. The young man returned to the farm, and brought with him his passion for technology which he planned to put to use in the fields.

By talking with others and researching on his own, little by little Mr Dilok accumulated the knowledge he needed to start working on the farm.

One of the first ideas was to invest in a harvester that cut, ground and cleared the fields. It solved his father's labour shortage and left the leaves for mulching – completely eliminating the practice of burning fields.

Then he installed solar-powered generators to pump water for irrigation, employed drip irrigation systems, reduced chemical pesticides and fertilisers, and began using GPS to track his shipments to millers and processors.

At the end of the experiment, he found crop yields were up by over 50% while farming costs were down by 25%. Mr Dilok believes technology can help other farmers, and so he met with them to demonstrate his methods of productive farming.

His efforts paid off. Mr Dilok was judged national outstanding farmer of the year and received the award from HRH Princess Maha Chakri Sirindhorn during World Food Day 2016 at the Food and Agriculture Organisation of the United Nations, Regional Office for Asia and the Pacific.

"It's through an inner drive that I want to learn more to reorganise my farm and closely follow the late King's sufficiency economy to make my farm sustainable and benefit the environment," he said.