Four South Koreans wait to be processed at Bang Lamung police station after being arrested for allegedly operating online gambling in Pattaya. (Photo by Chaiyot Pupattanapong)

The arrests followed a raid on the house in tambon Nong Prue, Bang Lamung district of Chon Buri, at around 3am on Saturday. Arrested were Jeong Kyu-jin, 35, Han Kyo-reh, 26, Choi Sung-min, 35, and Bae Jeong-hwan, 26.

The four Korean nationals have been charged with operating illegal online gambling.

Police said the suspects confessed they had been hired by an operator whom they had never met in person to run the operation in Pattaya. They reportedly said they had been paid monthly salaries of 60,000 baht each through wire transfers for three months since the operation began. Most of the punters were South Korean nationals, they claimed.

Pol Lt Col Chitdecha Songhong of the Chon Buri provincial police office, who led the raid, said it followed a tip-off from a police informant that a group of Koreans living in the house were involved in online gambling. The suspects were handed over to the Bang Lamung police station for legal action.

More than 40 Koreans were arrested in Thailand for allegedly running gambling websites in the first six months of 2015, according to police statistics.

Many of the suspects simply rented houses, apartments or hotel rooms and set up networks offering gambling services. Their customers are mainly their own countrymen.

Some suspects told police they chose Thailand as a base because the punishment would be harsher for such a crime in their own country.

Under the Gambling Act of 1935, as interpreted to cover internet-based activity, the punishments for running an online gambling operation are a jail term of three months to three years and a fine from 500 to 5,000 baht.

In South Korea, the crime is classified as participating in a criminal enterprise and operators face harsh punishments of up to life sentences. 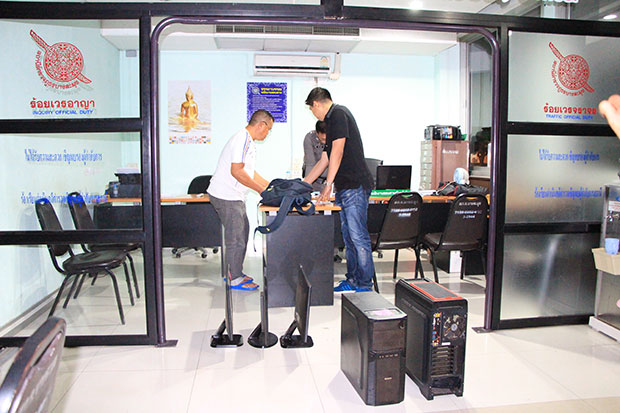 Police seize computers and other devices used for online gambling from a Pattaya house rented by four South Korean suspects during a raid early Saturday. (Photo by Chaiyot Pupattanapong)