A Korean tourist known only as Chang Hyun shows a pendant after his necklace was snatched in the early hours of Saturday in Pattaya. (Photo by Chaiyot Pupattanapong)

PATTAYA - A Korean tourist visiting Pattaya who was aware of the resort city's reputation for jewellery snatchers became a victim of the thieves on Saturday.

He was the second visitor from South Korea to have a necklace stolen in one night and the third Asian victim in three days.

The tourist, identified as Chang Hyun, told Pattaya police that his necklace worth 500,000 won (150,000 baht) was snatched while he was walking back to a hotel at 2am on Saturday.

He said the thieve was wearing a mask and safety helmet and drove off on a motorcycle.

Police are checking footage of CCTV in the area to find clues to the snatcher.

The 38-year-old tourist, who is a doctor, told reporters through an interpreter that he had been keeping an eye out for possible snatchers in Pattaya but did not think he would become one of their victims.

Authorities should be more vigilant to ensure better safety for tourists visiting Pattaya, he added.

He was not the only Korean to have a necklace stolen. (continues below) 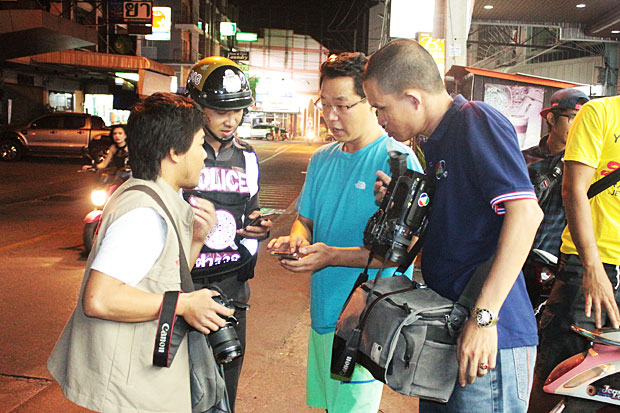 Choi Hyoung-kyu (third left), a Korean tourist, talks to police and reporters after his necklace was stolen. (Photo by Chaiyot Pupattanapong)

A thief snatched the necklace of Choi Hyoung-kyu, 48, at 9.30pm on Saturday after he was returning to a hotel with his wife.

Wisoot Sri-anut, who witnessed the snatching and called the police, said he saw a man on a motorcycle snatch the necklace and speed off while Mr Choi tried to catch him. (continues below)

Li Wei (left) from China talks talk to police on the necklace snatching on Wednesday. (Photo by Chaiyot Pupattanapong)

On Wednesday, Li Wei, 31, encountered the same thing in Pattaya.

The Chinese tourist went out to buy food after midnight on Wednesday and a man wearing a mask and safety helmet snatched his necklace before escaping into a soi, he told police.

No arrests have yet been made.