KANCHANABURI - The management of Thong Pha Phum National Park on Wednesday closed Khao Chang Puak and its dream destination "Knife's Blade Ridge" after a tourist fell and was almost killed there.

The management announced on its Facebook page that trekking and camping on Khao Chang Puak mountain in tambon Pilok of Thong Pha Phum district was prohibited as the dry season had started and wildfires were possible. The closure of the activities was aimed at public safety.

The order apparently followed the fall of a 26-year-old woman who trekked on the pointed ridge of the mountain on Tuesday evening.

Suphatthra Pholboon, of Kanchanaburi's Sangkhla Buri district, was in a group of five tourists who were walking back from the mountaintop. The group was escorted by a park ranger, but suddenly she fell from the ridge, plunging about 20 metres.

Park rangers, rescue workers and border patrol police walked eight kilometres at night across the mountainous terrain to reach her.

The woman, who was exhausted, sustained wounds to her face, head, limbs and body. The rescuers gave her first aid and carried her out of the mountain. They reached safe ground at about 2am on Wednesday.

She was sent to Thong Pha Phum Hospital and then referred to Paholpolpayuhasena Hospital.

Officials quoted the woman as saying that as she fell she was able to grab a bunch of grass which stopped her from falling further.

Khao Chang Puak is the highest peak of Thong Pha Phum National Park at 1,249 metres above mean sea level, and offers visitors a beautiful panoramic view of the park.

The highlight of trekking there is the very narrow ridge of the mountain called "Knife's Blade Ridge". The Tourism Authority of Thailand declared it as one of the "10 dream destinations" in the country.

Normally the management of the national park closes the eight-kilometre-long trail to the mountaintop during the rainy season or after heavy rain that would pose risks for trekkers on the narrow ridge. 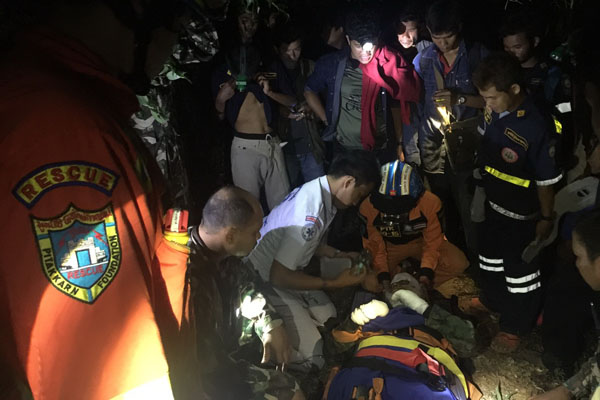 Rescue workers give first aid to the tourist who fell from the top of Khao Chang Puak in Kanchanaburi late Tuesday night. (Photo by Piyarach Chongcharoen)