The Royal Thai Police (RTP) offered more details on Sunday about an investigation being carried out into the encroachment of forest land in Thap Lan National Park in Nakhon Ratchasima allegedly committed by former deputy national police chief Jumpol Manmai and two other suspects. 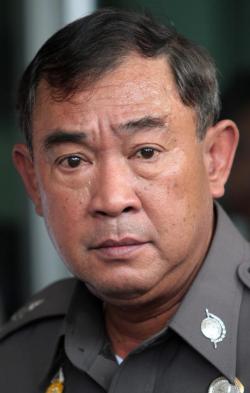 This follows a raid on Feb 6 on the roughly 13 rai compound which accommodates six houses, believed to be holiday houses owned by Pol Gen Jumpol. They are located in an area which was proven to be a part of the park. A complaint was lodged the same day with Wang Nam Khieo police against the three suspects, the RTP said yesterday.

Ms Chayanis, who is a deputy chief of tambon Thai Samakkhi administration organisation, was found to have owned the plot since 2008, said the RTP, adding she became Pol Maj Gen Pongdech's girlfriend in 2011 and they later sold the land to Pol Gen Jumpol. The houses were then built on the land and Pol Gen Jumpol began visiting the place while on holiday, while Tim Utas, a 47-year-old housekeeper, was hired to work at the houses, it said.

Ms Chayanis continued paying local tax on the land even after the change of ownership took place, presumably to disguise the identity of the true owner.

The three are accused of colluding to violate the Forest Act, National Park Act, and Reserve Forest Act by encroaching on the national park area, deforesting and illegally constructing buildings on it, said the RTP. Wang Nam Khieo police are investigating, though no charges have been laid.

Ms Tim, however, told a combined force of soldiers, forest protection officials and police during the search on Feb 6 that the houses belonged to Pol Gen Jumpol.

Ms Tim also said the land was given to Pol Gen Jumpol by Pol Maj Gen Pongdech and Ms Chayanis, while she herself was hired to work there and has been paid monthly since 2005.

Capt Thamanat Prompow, secretary-general of the ruling Palang Pracharath Party (PPRP), has refused to accept an award from the Armed Forces Academies Preparatory School (Afaps) for his outstanding contribution to society, according to a source.

The Bank for Agriculture and Agricultural Cooperatives (BAAC) has started offering loans this month to plant cannabis for community enterprises and agricultural cooperatives after parts of the plant were taken off the narcotics list.

National police chief Pol Gen Suwat Jangyodsuk said he has instructed law enforcement officers in Bangkok to reassess the way they police anti-government protests after police property was targeted in a recent demonstration.