This image from a CT scan shows the mound of coins in the stomach of "Bank". (photo via the Facebook page of Veterinarian Nantarika Chansue)

Veterinarians plan to operate on a suffering sea turtle that has spent years swallowing coins thrown into its pond by people seeking good luck.

Nantarika Chansue, a lecturer at Chulalongkorn University's faculty of veterinary science, said her team was already rehabilitating the turtle to ready it for surgery to remove the huge stack of coins that have accumulated in its stomach. They expected to operate in about two weeks.

The ailing turtle was brought to them by staff of the Air and Coastal Defence Command from Si Racha district, Chon Buri, where it lived in a disused pond.

The reptile's abdominal shell was cracked and infected, and it was suffering from a lung inflammation that prevented it diving. It could barely swim or eat.

The faculty did a CT scan of the turtle and discovered a huge lump of coins that measured 20x23x20 centimetres in size, in its stomach. This was pressing down on the ventral shell, which had cracked in the abdominal area and become infected.

Apparently it had eaten the coins visitors threw into its pond in the belief it would bring them good luck. The scan also showed a fish hook in the animal's intestine.

Without an operation, the turtle would continue to suffer and soon die, Ms Nantarika said. She thanked donors for helping raise 15,000 baht toward the cost of treatment for the turtle, which she had named "Bank".

She also asked people not to throw coins into ponds where there are animals, saying, "It is a serious sin." 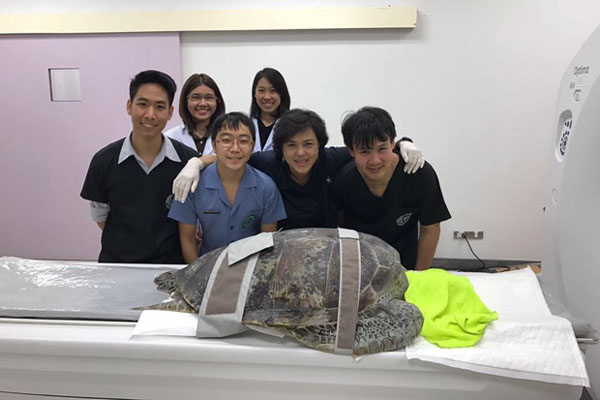 Veterinarian Nantarika Chansue, wearing gloves, and her team pose with the suffering, coin-swallowing turtle "Bank". (photo via her Facebook page)