Firemen take several hours to battle a fire at a major recycled paper factory in Prachin Buri's Muang district on Friday night. More than 20 fire trucks were deployed to the scene. (Photo by Manit Sanubboon)

Firemen and 24 fire trucks from nearby local administrative organisations and military units were deployed to the fire-gutted paper factory, owned by United Paper Co, in tambon Wat, said Pol Lt Hassapat Jaipong, a duty officer at Muang police station, who was alerted at 9.30pm.

The fire started from huge piles of paper, about 10 metres high, in the compound of the factory. Flames sent a plume of smoke high into the sky.

It took firemen several hours to bring the blaze under control, but it has not been fully extinguished. Backhoes were deployed to dig up piles of paper and water was sprayed over the area until Saturday morning.

Mr Suriya said about 10,000 tonnes of recycled paper were destroyed by the fire, which ravaged over three rai of the seven-rai compound. Nobody was injured. The fire was expected to be extinguished on Saturday morning. 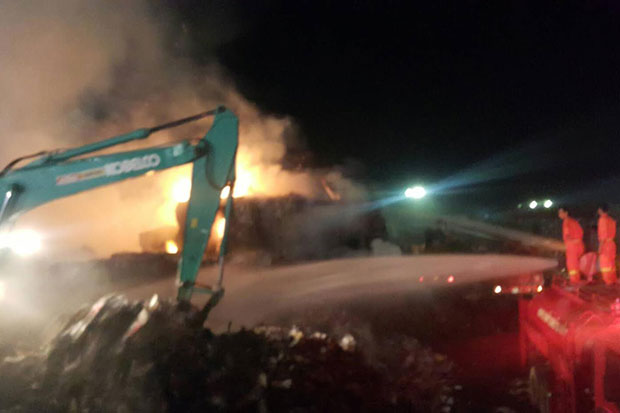 A backhoe vehicle digs up piles of paper engulfed in flames for firemen to spray water on. (Photo by Manit Sanubboon)