Wat Phra Dhammakaya monks enter the temple on Saturday after the Department of Special Investigation decided to end the search as former abbot Phra Dhammajayo, wanted on money laundering and forest encroachment charges, could not be found. (Photo by Pongpat Wongyala)

The Department of Special Investigation will seek warrants to search places outside Wat Dhammakaya for its former abbot after receiving tip-offs, according to its chief.

Meanwhile, the Justice Ministry will set up a "joint command" inside the temple to take over its management and maintain order, said Thawatchai Thaikieo, the ministry's ministry deputy permanent secretary and spokesman.

The new attempt to find the former abbot came after the DSI ended the search of Wat Phra Dhammakaya for Phra Dhammajayo after a siege that lasted 23 days.

DSI chief Pol Col Paisit Wongmuang said on Saturday that the DSI and police had set up teams to search for Phra Dhammajayo after informants provided clues to his whereabouts, which were branches of the temple in the country.

He said the embattled former abbot may have sought refuge at some of these places and one of them was a venue outside the Section-44 restricted zone that the DSI had earlier been alerted about.

Junta chief Gen Prayut Chan-o-cha declared the temple and its surrounding areas a restricted zone using Section 44 of the interim constitution on Feb 14 so officials could search the temple complex in Khlong Luang district of Pathum Thani and maintain order in the area.

The DSI is now double-checking information regarding the whereabouts and gathering evidence to seek court approval to search the places in question, said Pol Col Paisit.

National police chief Pol Gen Chakthip Chaijinda on Saturday said he had not received any reports from immigration police that Phra Dhammajayo had fled the country.

Phra Dhammajayo has not been seen in public for nearly nine months. Temple spokesmen have said that the senior monk is being treated for a number of serious health problems. There have been reports that they inclide deep vein thrombosis as a result of diabetes but these have not been confirmed.

The Justice Ministry also announced on Saturday even though the search inside the temple had ended, the DSI was duty-bound to find the former abbot.

"Laws must be enforceable in and around the temple," he said.

He added that the joint command to be set up will ensure safety and maintain order in and around the monastery.

"It will also manage the temple and control its activities. Assemblies at the market must end," he said.

The command will comprise representatives from Police Region 1, the National Office of Buddhism, Pathum Thani provincial administration and ruling provincial monks, he said.

"I think the important thing is that laws must be enforceable on Phra Dhammajayo and the temple in the long run while authorities must prevent interferences by a third party," he added.

On Friday, the temple followers allowed the DSI to resume searching zones A and B and the six-storey medical care building, Boon Raksa. Zone A covers 196 rai of land and Zone B covers 130 rai. Boon Raksa, which is well-guarded, is on a 57-rai plot in the vast temple complex.

However, authorities failed to find the former abbot in the 400-hectare complex, prompting them to end the search.

The search for Phra Dhammajayo, the 72-year-old founder of the Dhammakaya sect wanted on money laundering, receiving stolen assets and forest encroachment charges, began on Feb 16.

Meanwhile, monks and disciples of Wat Phra Dhammakaya on Saturday morning began dismantling tents and other barricades after the DSI ended the search. The clearing is expected to be completed today. Officials allowed monks and disciples to enter the temple as normal.

The temple said it hoped authorities would soon lift the Section 44 order. 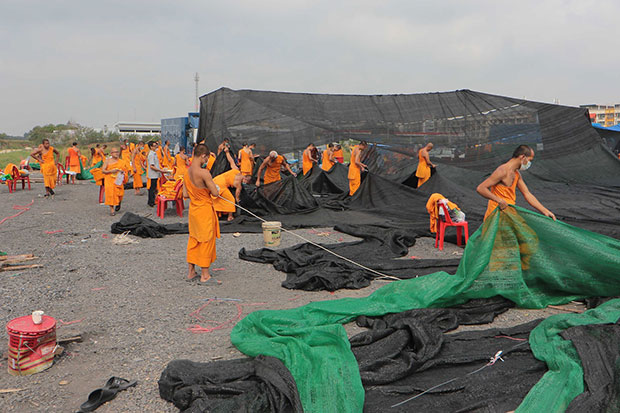 Monks dismantle tents and other barricades set up earlier in front Wat Phra Dhammakaya to obstruct the search of the vast temple complex in Pathum Thani. (Photo by Pongpat Wongyala) 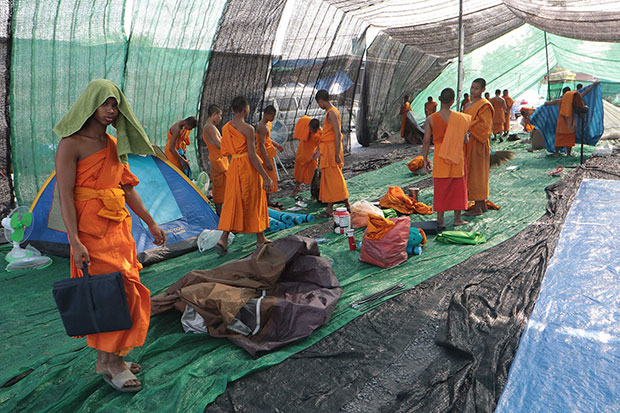 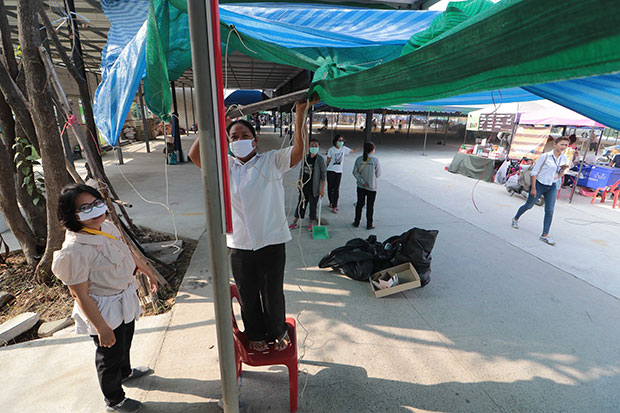 Disciples of Wat Phra Dhammakya remove tents set up in front of the temple in Pathum Thani. (Photo by Pongpat Wongyala)