TAK - Four people, including a girl, were killed and one seriously injured when a lorry loaded with motorcycles crashed head-on into an oil tanker lorry in Mae Sot district on Thursday morning.

The collision occurred at kilometre makers No.63-64 on Tak-Mae Sot route in tambon Dan Mae Lamao, said Pol Lt Lomdet Jiewkaew, a deputy investigation chief at Pawor police station in Tak. The incident was reported at 10.40am.

The 18-wheel oil tanker lorry was heading to downtown Tak when it was hit by the six-wheel lorry carrying bikes in the opposite direction.

The force of the crash killed four people, including two males and two females. Three of them were adults and the other was a girl. One more person was badly hurt. There were no details of which vehicle the victims were in.

Thai media reported that the driver of the six-wheel lorry lost control going down the hilly road at the curve and rammed into the oil tanker. 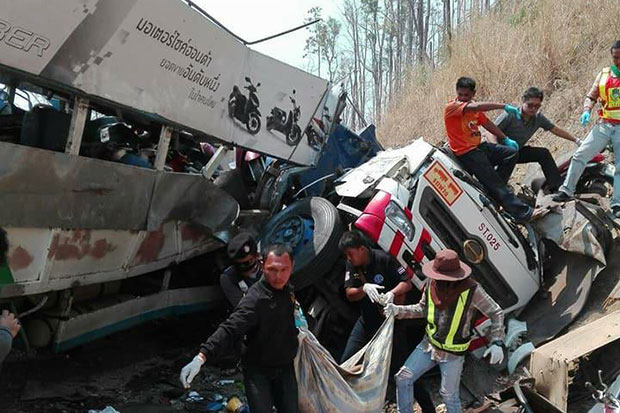 Rescue workers retrieve the bodies of dead victims and one injured person from the wreckage of the oil tanker and a truck loaded with motorcycles following a crash in Mae Sot district of Tak on Thursday morning. (Photo by Assawin Pinitwong)