DSI to decide on status of Kotee case
Thailand
General

DSI to decide on status of Kotee case

A summary of the probe into fugitive red-shirt leader Wuthipong Kochathamakun, alias Kotee, will be sent to the Department of Special Investigation (DSI) tomorrow for consideration as a special case, says the Crime Suppression Division (CSD).

Once the summary reaches the DSI, the department chief can decide immediately whether to accept it as a special case without going through the DSI board as it already meets certain criteria, according to Pol Maj Gen Suthin Sappuang, commander of the DSI. Special cases merit significant extra resources for further investigation.

A police source said warrants have been issued for Mr Wuthipong's arrest on charges of possessing weapons of war and violating the Firearms Act.

The government plans to seek the extradition of Mr Wuthipong from Laos following the discovery of a huge cache of weapons by authorities at a house in Pathum Thani province this week. They suspect the weapons were his.

Also Wednesday, authorities carried on their search of freight containers at a yard in Samut Prakan province. They were believed to hold some of the weapons connected to Mr Wuthipong.

One suspect arrested following the raid in Pathum Thani claimed Mr Wuthipong had asked him to keep some of the weapons in the containers for him.

The police source said the search might take some time as there are almost 4,000 containers to go through. Two of the containers have gone missing, the source added.

Meanwhile, Pongporn Pramsaneh, director of the National Office of Buddhism, is filing a defamation charge against Phra Buddha Isara, abbot of Wat O Noi, after the monk released a recording of a phone conversation allegedly between the pair over matters relating to Wat Phra Dhammakaya.

Pol Lt Col Pongporn said the recording was taped without Mr Pongporn's knowledge. Phra Buddha Isara apparently called the director to ask about progress in appointing a new abbot for the embattled temple. He said someone other than a member of the temple may be considered for the position.

The director said the audio clip was released to the public and supporters of the temple allegedly edited it to make it sound as though Mr Pongporn was taking orders from Phra Buddha Isara.

This was designed to unfairly pressure the temple and had damaged his reputation, he said.

Also, Phra Dattajivo, former acting abbot of Wat Phra Dhammakaya, reported to prosecutors Wednesday to hear a charge of defying an order from the National Council for Peace and Order. 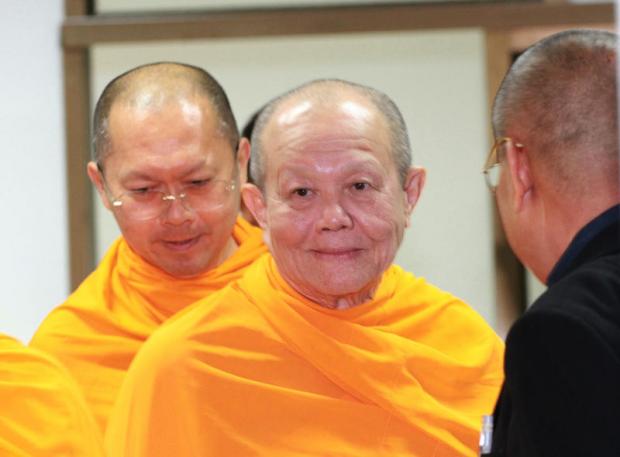 Phra Dattajivo (centre), former acting abbot of Wat Phra Dhammakaya, reports to prosecutors to hear a charge of defying an order from the National Council for Peace and Order. (Photo by Pongpat Wongyala)

The 77-year-old monk appeared at the Thanyaburi prosecution office to acknowledge the charge, having ignored a summons to report for questioning last month. He declined to say if he had recently met Phra Dhammajayo, the founder and former abbot of the temple sect who is wanted on several criminal charges.

Prosecutors claim Phra Dattajivo used 1 billion baht of donations to the embezzled Klongchan Credit Union Cooperative to manipulate the stock market, using nominees, during his time as acting abbot from 2010 to 2016.