Crackdown on drivers who fail to pay up

Police, the Department of Land Transport (DLT) and Krungthai Bank have been rushing to jointly develop a database system to facilitate punishments for motorists who fail to comply with new traffic rules within a month.

The new database system that will connect the Royal Thai Police's (RTP) traffic ticket database with the DLT's vehicle registration database system and the state enterprise bank's transaction system is expected to be ready for use in one month, assistant national police chief Witthaya Prayongphan said.

Speaking after a Thursday afternoon meeting with the DLT and Krungthai Bank, he said this cooperation is aimed at facilitating the strict enforcement of laws on vehicles and land transport required under orders from National Council for Peace and Order (NCPO) chief Prayut Chan-o-cha. 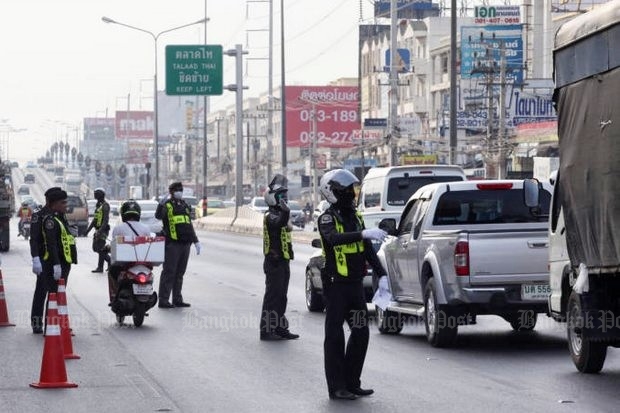 While the new plan has been sold as 'traffic enforcement', in truth it is all about fine collections, with emphasis on enforcing seat-belt laws. (Bangkok Post file photo)

Gen Prayut has exercised his special power allowed under Section 44 of the interim charter to order police and land transport authorities to strictly enforce the traffic laws, in an attempt to improve road safety ahead of the upcoming Songkran holiday.

The order was published on Tuesday and immediately took effect.

Although the RTP has its database system connected with that of the DLT already, information shared via the linked computer system at this point is only some basic information, not the traffic ticket fine payment system, he said.

More than 80% of traffic tickets issued and sent by post to offenders last year remain unpaid, he said. A large portion of these tickets were issued for speeding which has been found to be a leading cause of heavy road casualties, especially during the New Year and Songkran holidays, he said.

Before Tuesday's Section 44 order, the DLT did not have the authority to monitor unpaid traffic tickets and handle the fine payments, he said.

The order basically allows for stricter enforcement of two laws, one for vehicles and the other for land transport, DLT deputy director-general Kamol Buranaphong said.

Under this order, the stringent seat belt fastening regulation now applies to only the driver and front-seat passenger's seats in personal cars -- seven-seater and smaller-sized ones -- registered between Jan 1, 1988 and Jan 31, 2012, he said.

All people, drivers and passengers alike, travelling in taxis registered from Jan 1, 2011 are required to fasten seat belts under the same order, he said. (Story continues below)

All people travelling in passenger vans registered on April 1, 2012 or later, are required to fasten seat belts, he said, adding that the same seat belt-fastening rule applies to only the driver's seat and the front passenger's seat when it comes to songtaew, pickup trucks with an extended cab, and motorised tricycles.

The reason is these types of vehicles are not suitable for installing seat belts for all seats, he said.

All people travelling on inter-provincial passenger buses with a maximum of 20 seats are also required to fasten their seat belts, he said.

Taxi drivers who are caught allowing more than five people to travel in the same taxi at the same time will face punishment, while each of the passengers who fail to fasten their seat belts will face a maximum fine of 500 baht, he said.

The RTP also is considering adopting a new format of traffic ticket to improve clarity and also incorporate the driver's balance of points demonstrating his or her obedience to traffic rules in the ticket as well, Pol Lt Gen Witthaya said.

For instance, motorists will be punished by having their points cut by 30 for an incidence of speeding, while taxi drivers may face a 60-point cut punishment for refusing to take a passenger, he said.

The measures will be strictly enforced within 30 days, he said.

Seat belts have been proven to help save the lives of 34% involved in severe accidents, particularly the lives of passengers sitting in back seats, said Dr Thanapong Jinvong, programme manager of the Road Safety Group Thailand.

He said that he supports the move to strictly enforce the law on the maximum number of people allowed to travel in the same car.

In one accident that occurred during last year's Songkran festival, four out of 10 people travelling in a Honda Jazz car were killed, although a maximum of five people are permitted to travel in this type of vehicle, he said.

The NCPO's order has received both positive and negative reactions from some motorists.

Businessman Boonchai Chueachanwong, 49, said tougher traffic law enforcement could present a chance for unscrupulous traffic police to make money out of collecting bribes in exchange for not giving offenders a traffic ticket.

"Honestly, many buckle up only when the police are in sight and unfasten the belt as soon as the police are gone," said Mr Boonchai. He does, however, agree with strict legal measures against those failing to pay their traffic ticket fines.