Artist and activist Chaiyapoom Pasae, a Lahu, was shot and killed by a soldier at a drug checkpoint. That is the complete set of facts everyone agrees on.

As of press time, there are civilian eyewitnesses, an army incident report and a police report. The latter two differ a bit, but their accounts are radically different from several Lisu people who were there and saw everything. Perhaps you can tell which is which in the following three paragraphs. 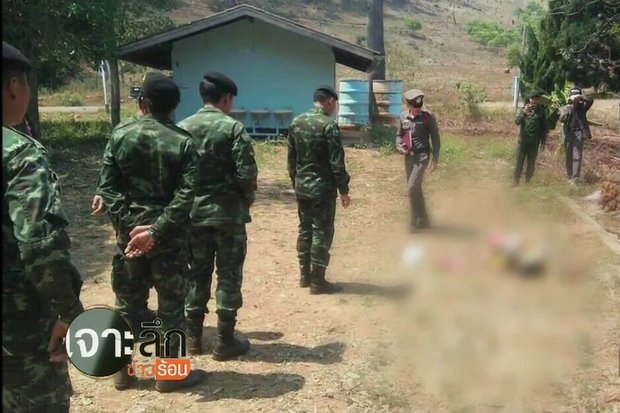 The blur marks the body of Chaiyapoom just after he was shot, as the police, military and their photographers begin to coordinate the stories they will tell the public. (Screen grab via TNN)

When Chaiyapoom and Lahu friend Pongnai Saengtala, 19, were stopped at the military-police checkpoint in Chiang Dao district of Chiang Mai, Chaiyapoom was dragged or got out of the car, where soldiers or police asked him questions or beat him. At this point he ran away or walked back towards his car, where he got his hand grenade -- or didn't. He rushed at one of the soldiers to attack him with the hand grenade, or he didn't.

A soldier tried to shoot him in the arm, like cowboys do in old movies, but his single shot was just a tiny bit off and it went through Chaiyapoom's heart, instead.

Soldiers found 2,800 methamphetamine tablets in his car or on his cold body, or produced them from under their shirts and planted them on that body. The unexploded hand grenade, which did or did not exist, disappeared in the excitement.

Just in passing, hardly worth mentioning really, but on Feb 15, soldiers manning a drugs checkpoint in Chiang Dao district of Chiang Mai were questioning a Lisu man, Abea Sea-moo, about the yaa baa tablets they found in his possession. But then they had to shoot and kill him in self-defence when he tried to attack the soldiers with a hand grenade. Those darned Chiang Dao people and their hand grenades, eh? It will be the death of them.

Question: Why was a soldier stopping random or even carefully selected vehicles, looking to make an insignificant drug bust on one of the most onerous and boring duties in the North?

Basic answer: Because he can. Everyone should constantly recall that on March 30 of last year, Prime Minister and National Council for Peace and Order commander Gen Prayut authorised him to. The Section 44 order of that day deputised every member of the military with powers of policemen. It simultaneously granted instant amnesty if they bungle and kill people accidentally.

That latter point was included because the general prime minister knew as well as we did that there would definitely be muckups and amnesty would be needed. A soldier will get it wrong in a police officer's tight place.

Fans of Section 44 may hope otherwise but soldiers are not policemen. Never will be.

Not a question, but a tell, a tall tale exposed. No soldier ever has, or ever will, fire one bullet at a man advancing and threatening his life with a hand grenade. Soldiers are trained to keep shooting such a person, over and over.

On the other hand, if a person were running away, say, or detained, lying on the ground face down and cuffed, no soldier would waste bullets. One round would be just the right amount. 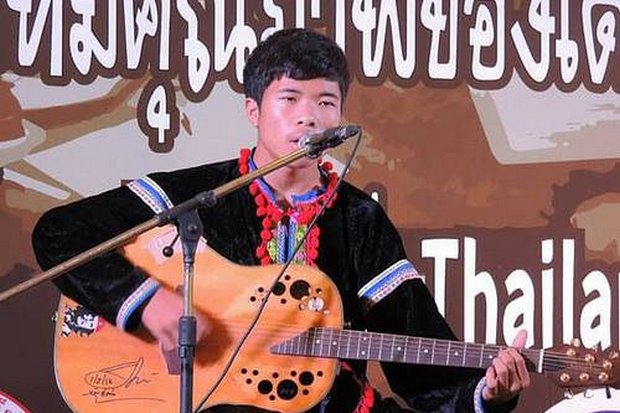 Question: Show us the evidence.

This part now is farce. The Lisu eyewitnesses say soldiers pulled drugs out of their fatigue shirts and planted 2,800 speed pills on Chaiyapoom. For certain, if a hand grenade existed, it didn't explode and therefore hadn't had its pin pulled and therefore was no threat to the checkpoint soldiers and police.

Two things, though. The case illustrates just how fantastically and now fatally wrong Prime Minister Prayut Chan-o-cha was in deputising all of the military as law enforcement. Soldiers haven't a clue and receive not a lick of training in dealing with police matters. The very kindest interpretation of the extra-judicial killing of Chaiyapoom is that the panicked soldier acted wrongly. There are other possibilities.

That leads directly to the second point under Gen Prayut's order to give police powers to every soldier in the land. The very worst scenario in Chaiyapoom's death will be a severe reprimand to the soldier who killed him. Under the prime minister's orders, no deputised soldier can be held responsible in any way for any acts while on duty, right or wrong.

The soldier who shot and killed Chaiyapoom, on purpose or in a panic or somewhere between, did have, literally, a licence to kill.